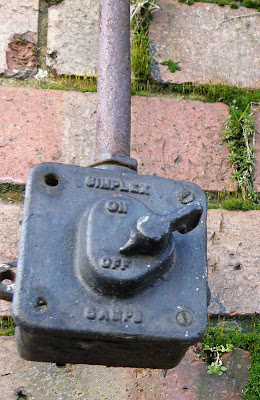 The derelict cinema, which occupies a large space in the centre of Tunbridge Wells, has proved over the years a fertile source of imagery for my camera. Now they are going to fence off the footpaths which take you past the best of it. Soon, they promise, the cinema and the shops on either side of it will be demolished, to be replaced by a shopping arcade, a hotel and a night club. Many people doubt that after 10 years of such promises, the new development will happen soon. Most are grateful. All they want is a another town centre cinema. Some may feel as nostalgic about the loss of this wasteland, as they do about the loss of the cinema, and of the fine house that was on the site in the 30s before the cinema was built.

A friend of Heidi's, on the telephone from Hamburg, tells her, yesterday, "I see Tunbridge Wells is in the news". Apparently the town was brought to a halt when a road was closed on account of an armed man in one of the houses." It's the first Heidi has had heard of it. I haven't either, and we live near enough the centre of the town." It is only today that we have the news confirmed. Apparently the incident occurred two days ago. It just shows how slowly news can travel even in the age of "instant news" and by what circuitous routes.

The icy wind is on everyone's mind, as it should be in a country where weather is a traditional subject of conversation. "When I got home," the owner of the convenience store tells me, "my wife said 'let's go for a walk'. 'No way, I said, not  when it's this cold, not at night, when it's even colder. No way, I said." Later, a man and his brother, regulars at The Compasses greet me with observations about the temperature of the wind. "Makes you ears stand up, doesn't it?" says one cheerily.

Isn't it odd how the old and derelict can provide so much of this "fertile source of imagery"? I'd be horrified to have our home look like this, yet am delighted to find them elsewhere, though a bit scarce in a younger city like Vancouver.

Given that many of our appliance plugs have fuses rated at 13 amps it seems astonishing that this monster switch is rated at a lowly 5 amps, probably the same as a CD player. Presumably it operates an external light, but why have the switch outside? Perhaps the answer is a variant of the final line in Roman Polanski's best film: "It's just Tunbridge Wells, Plutarch, just Tunbridge Wells."

I remember some of your rust photographs, M-L.

It looks like some kind of outside light, but it must have been a long time ago because there is little trace of any light or even light bracket now. There are industrial archeologists I believe who would probably be able to trace its origins.