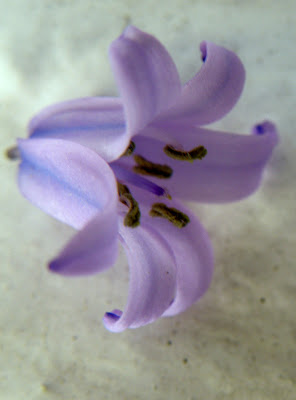 Bluebells we all know. |To note a bluebell on its own is a less common experience for you tend to think of them in drifts. But a blue bell, just one delicate flower selected from a raceme of eleven or twelve bells drooping from a stem which lean over and bend under their weight. That is something we consider less often.

My reading of La Cousine Bette is coming to an end. The English translation to, which I refer from time to time and which as I mentioned here before is by the poet Kathleen Raine, has been in my possession for at least 50 years. On the telephone to day, I tell Anna, who is Kathleen Raine's daughter, what a good translation it is, and how interesting it is for me to have an insight into the process of translation, through the work of someone, whom I used to know. She says that she remembers her mother translating Balzac. She says that she also translated Les Illusions Perdues. Then she adds " they still send me small cheques from America by way of royalties for her translations," and adds, "but they are so small that the Bank won't accept them".

Twitter often has a bad press. But Dave Bonta, co-founder of the literary magazine qarrtsiluni, demonstrates every day how well the twitter form works as a medium for poetry. Every morning he steps on to his porch and records what he sees in a haiku-like statement of fewer than 140 syllables. His daily observations are to be found on http://themorningporch.com They succeed in imparting a sense of place, of the seasons,and of nature, alive and in action. At the same time, he invents or adapts a form which fits in with the needs and constraints of our fast moving digital age. Here is an example: "A dandelion-seed parachute drifting past the porch shudders, hit by a raindrop. The streambank grass ripples where a chipmunk runs." That was two days ago. He has been posting regularly since November 2007
Posted by Unknown at 4:53 pm

Hey, thanks for the plug! It's a fun daily writing exercise. I am honored by your high opinion of the results.