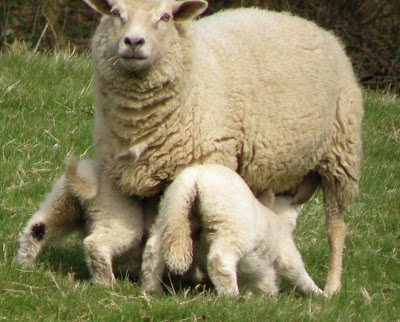 The first dandelion clocks of the season are soaked by heavy rain today before the seeds are mature enough to loosen and fall or blow away. They have the puzzled look of heads of wet hair drenched and bedraggled.

In the Penguin Book of American Verse, I find a poem which I had forgotten and I am glad to be reminded of. Crows have always fascinated me. I used regularly to mention the couple that I would see in The Grove and called Mr and Mrs Crow. That was before I encountered The Crow, aka Martha, a fellow blogger who, describes touchingly and often with great felicity, the ups and downs of her life. The Crow, Martha somehow brought these birds and their habits into sharper focus and kept them on my mind. And so today I find myself thinking of Martha The poem is anonymous and is to be found between Amy Lowell, 1874 - 1925 and Robert Frost 1874 -1963. I wonder if Martha knows it.

"I sometimes think I'd rather crow
And be a rooster than to roost
And be a crow. But I dunno.

A rooster he can roost also,
Which doesn't seem fair when crows can't crow.
Which may help some. Still I dunno.

Crows should be glad of one thing though;
Nobody thinks of eating crow,
While roosters they are good enough
For anyone unless they're tough.

There're lots of tough old roosters though,
And anyway a crow can't crow,
So mebby roosters stand more show.
It looks that way. But I dunno.

Wonderful picture of Ewe and her lambs!

Oh how old Anon, surely dead these many decades, must be hugging himself. Yesterday I was struggling to get to the heart of that elusive word "wit". Here is a perfect example, all the more remarkable in that it takes a variant of the Adam Bede route yet never lapses into earnestness.

Hug, smooch. Another hug. Thank you.

The poem is new to me, and a delight to read. My crow buddies likely would appreciate the humor, as I do.