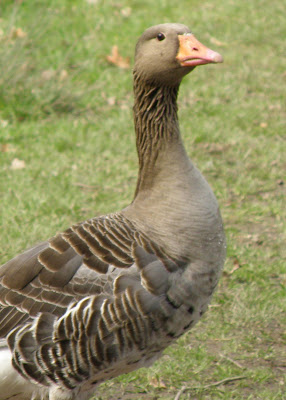 Portrait of a goose.

In the window of Oddbins wine merchant in MountPleasant, is a bottle labelled Jumilla. It prompts  memories. I first drank the wine of Jumilla more than 50 years ago. I was teaching English in Murcia, then a city firmly rooted the past. It was then  a dignified, solid place with a cathedral in the Plateresqe form of  Rococo. When I lived  there, to the puzzlement of farmers from  surrounding  villages, traffic lights were errected for the first time. Four traffic policemen were needed to explain how the system worked. Hortas or market gardens, watered by an irrigation system, which owed its origins to the Moorish occupation of the country supplied a rich selection of Mediterranean vegetables. In the evening I would go to the same restaurant and drink the  full bodied local wine. I can still hear my friend Antonio Marin raise his glass : "el vino de Jumilla!" he would say with pride. The wine invariably came straight from nearby bodegas, and would very rarely if ever find its way into a bottle, certainly  not one with a posh label, like the one in  the Oddbins window. "Arriba el campo!" Antonio would toast, "Long live the countryside", in  deliberate contrast to the radio's nightly proclamation " Viva Franco! Arriba Espana! ". It was Antonio's only form of  protest against a regime, which he hated.

In The Curry Club, aka The Bloggers' Retreat, a woman sitting at the table next  to Barrett Bonden and me, and about to leave, interrupts an item on our agenda. It concerns episodes in novel which,  because they stand on their own, could run the risk of disturbing the flow. "You're right" she says, agreeing with one of us, "the author should feel free to do what he thinks right and not be led by rules. "  She needs little encouragement to produce a copy of her recently published book; and to show us a cutting from a local newspaper, where it is reviewed in an article  "as one of the 50 best novels about Hackney".

Murcia - ah, had to look that up and learn something new again! So, another interesting fact about your life has been revealed, Plutarch. I'd love to a read your auto/biography if there was ever one.

And the Curry Club, where we met Mr and Mrs BB on the 13th of May last year.... wish I could have been there to listen to you two! Pardon my nostalgia these days as I recall that fantastic trip a year ago.

Wonderful Goose. By your accidental association I think Jumilla a good name for the Goose.

As a resident of Hackney, I'd love to get hold of that list. I'd read my way through them all (eventually).

A little bit of googling reveals that Elizabeth Carola's book is called Hot and other stories. It is published by Siren Press and consists of 10 stories set in Hackney.

CC A story is waiting to be written about a goose called Jumilla.

But what about the 50 worst novels about Hackney?