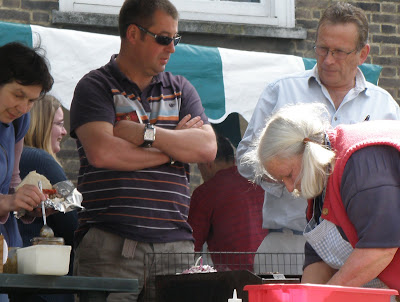 At the burger stall at the Farmers' Market. The smell of meat and onions caramelising on the hot plate is what sells burgers.  Though a regular at the Market, I have never tried one of  these because I have refined and reduced my diet, since the days when I liked that kind of thing, but I can see the attraction as well as smell it.

Outside The Ragged Trousers in the Pantiles, we are sitting with a drink and  sharing a bowl  of whitebait, when there is a kerfuffle at the next table. A presumptuous pigeon has flown off the pavement and landed on the grey head of a woman, who is just about to take a sip from her cup of coffee. To my embarrassment I laugh long and loud. I can't help myself. She, poor woman looks startled, before seeing the joke. "It was sitting on my foot," she said. Her husband  is not amused. "Shoo," says a waitress to the pigeon, which flutters off, but not far. There is a lack of conviction in the waitress's voice and accompanying gesture It could well be that she is frightened of pigeons. And who wouldn't be?

Half way up (or down) Mount Sion is a strip of grass in front of a house where, as I have mentioned a few days ago, bluebells grow, in the open without the shade that bluebells usually prefer. Now joining them are a few bright buttercups, an unusual combination. Blue and yellow look good together. This blue and this yellow in particular.

Does one fear pigeons? Antipathy is the more likely reaction though it's hard to make that stick when you're wearing one like a hat. Was it Thurber who deconstructed the line: "Pigeons on the grass, alas." His conclusion: there's no "alas" in pigeons.