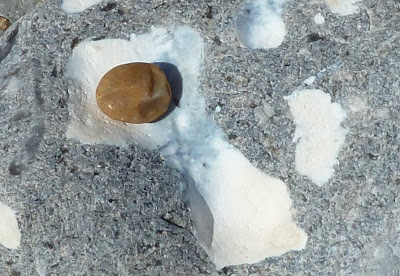 This small pebble which I surprise in this position on the beach seems to have worn a crater in the larger one. But as both are lying loose among other pebbles my theory may be faulty.

In the train, opposite me and next to Heidi sits a young man reading a book. The book is on the table in front of him. And he attacks it as though he wants to eat it. It is a large book with illustrations and he appears to be short sighted, so that he leans forward over it,  his nose not far from the print. But  most surprising are  his large white hands, which clutch  the volume now at the top, now at the sides, caressing the pages and cover  as he reads.   His hands move restlessly, sometimes flipping back to the previous page to check a word or a fact. At first I think that it must be a text book of some sort which this extreme physical activity demands.  But the skill  developed over the years, in deciphering print upside down, honed by long experience in similar  cases, reveal that it is The Sherlock Holmes Short Stories which he is reading. I find myself wondering what facts  the great detective would have deduced about a reader of such marked assiduity.

Later  in another train, a German girl student  talking to fellow students - young men, one English and one French - offers a piece of chewing gum from a small, round box.. "Would you lend me a chewing gum", she is repeating a request from one of her companions, by way of clarification. " I would rather give you one," she  adds, and then: "To lend is to give; to borrow is to take." To complicate matters further in some languages, Heidi and I reflect, the same word is employed for  "lend" and "borrow".
Posted by Unknown at 4:33 pm

The way I saw it was that they were talking about two things. The technical difference between the word "lend" and the word "borrow"; and the custom of saying lend me a fiver,£5, as heard someone do the other day, when they meant was give me a fiver.