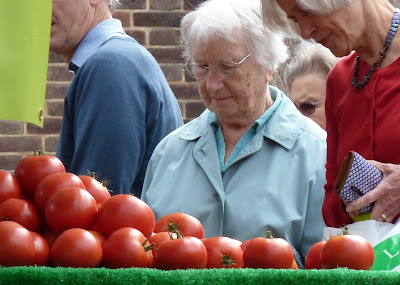 A stack of tomatoes from  the Isle of Wight deserves and receives careful consideration at The Farmers' Market in Civic Way.

Morning glories again. They persist, running along the branch of a vigorous climbing rose, and weighing it down;  although, almost as a guage of temperature, they seem paler in the autumnal weather.

In Hall's bookshop, following a discussion about  the charms of cumbersome19th  Century novels Sabrina says: "Have you seen the box of French paperback?" She has never taken to stocking  books in French, and hides them away out of sight. She pulls a box  from under a table. They aren't all paperbacks.  I can't resist two Alphonse Daudet  (Editions Fasquel) hardbacks with illustrations, while the paperbacks, all in good condition, include four by Henri Troyat, an author whom I have recently begun to enjoy and several others, including two by Philippe Labro, both  in Gallimard's Folio Collection. I stagger to the cash desk where she casts an eye over them with apparent distaste, " Two pounds," she says.
Posted by Unknown at 4:45 pm