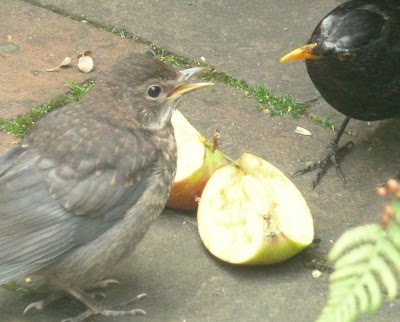 In a neighbour's garden.

I have used the same words myself and wondered a little at them: "Hello, there!" a local shopkeeper greets me. I used to say it when I had forgotten a person's name, so that "there" became a substitute for John or Jim. It is also I suppose a little friendlier than a crude "hello."

The two crows who at this time of year I so often see in The Grove, are back. They peck at the newly cut grass. Invariably there are just two crows, no more. I used to call them Mr and Mrs Crow and saw them as proprietors of the little park. But the time has come to say goodbye to such anthropomorphic rubbish. What is more they are probably different birds.
Posted by Unknown at 4:14 pm

The birds in your photo resemble our robins, and might be in the thrush family. Our robins have yellow beaks and the same light-colored ring around the eye. The baby in this photo is a dead (well, live, I guess) ringer for the baby robins in my yard this year.

Crows can live as much as 17-20 years, though most wild ones don't. If the Grove provides them with adequate food and shelter, and they are not molested or threatened by other animals or humans, the pair you see might very well be the originals. There's a very good chance one of these two is the offspring of Mister and Missus, if they aren't the progenitors themselves.

Regardless, please pass along my heartiest felicitations to them. CAW!

I recognise the usefulness of "Hello, there." for exactly the reason you give. But I feel it has to be inflected to get the right effect. One has to say it bluffly and slightly louder than normal, the head not only erect but slightly thrown back. A sincere (looking) smile is also necessary. There's a whole short story unreeling from this.

Crow Thanks for the information about the longevity of crows. Maybe it is the same crows which I have been seeing in The Grove. I think I shall revert to calling them Mr and Mrs Crow, and to my fantasy about how they believe that they own the little park.

The birds in the photo are what we call blackbirds.

BB You may recall one, Tony Smith, a vacuous fellow. As I sometimes do now, I am ashamed to say, he used to forget the name of someone when his path crossed with theirs unexpectedly. When he passed you on the stairs in Hatfield House, there was I fancied, the faintest of pauses between the "Hello" and "there".