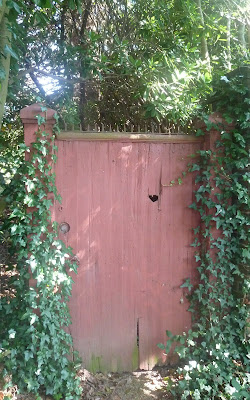 Not into this garden, Maude.

A notice about Nordic walking -  " it uses 90 per cent of your body's muscles. Taster session, only £5.00)"  - is headed "Kentish Nordic Walking". It refers I imagine to that form of exercise where you walk with the help of two long sticks, rather like ski poles. It sounds a bit of an anomaly among the fruit orchards and woodlands of Kent. Then you remember Hengist and Horsa. In the fifth century AD they are said to have led the first band of Teutonic invaders of England. They landed in Ebbsfleet on the Isle of Thanet after sailing from Jutland  to help King Vortigern  against  attacks from the Picts and the Scots. The brothers were rewarded with the gift of Thanet, only later to turn against Vortigern. But they were defeated at Alyesford where Horsa met his death, Hengist however survived and is said to have conquered Kent.  Ebbsfleet is now the main Eurostar terminal

On my way to the vegetable garden I have to pass the swimming pool. This is invariably covered with plastic to keep in the heat and keep out the leaves. Today I see a pigeon walk across the smooth expanse of blue. "Pigeon walks on water" I say to myself, who always fancied himself as a headline writer.
Posted by Unknown at 5:03 pm

What a fine collection of names in your second para. Voltigern must surely have been born before his time. I imagine him electrically powered.

Do you remember that piece you wrote about a brewery (Courage?) handling system. We had a democratic session trying to come up with a headline but in the end you went all autocratic and came up with Passing Round the Bottle. It was very early days, long before I insisted everyone had to repeat my mantra: no active verb, no pizazz.

That reminds me, must dig ours out again, haven't used them in a while. Would you like to try our Nordic walking poles (they are indeed like ski poles with rubber tips), made in Finland and a form of exercise invented there by the Finnish ski teams trying to stay in condition off-season?

I am intrigued by the gate; more so, I suppose, by the mystery it keeps from our prying eyes.

I like its faded color (dusty rose?), its bar of spikes across the top, the tangle of plant parts visible just beyond, and the crooked-heart-shaped hole just at my eye level.

If you don't mind, I'd like to add that to my photo files, perhaps to inspire a piece of fiction, but mostly to admire now and again.

BB Even now I would defend Passing round the bottle on the ground that it is or almost is an expression in its own right.

M-L I recall your mentioning that you and Fred had inclinations towards Nordic walking.

You are welcome, dear Crow. It is the sense of mystery and secrecy about what is beyond that appealed to me in the first place.