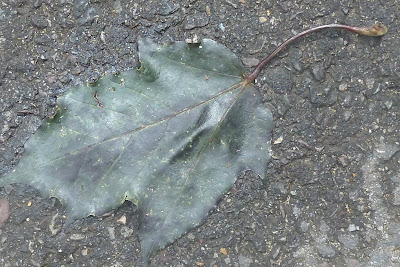 This photograph of a leaf pressed into the tarmac has not been tweaked. It is one of  this year's leaves which has I imagine reacted to some sort of chemical oil or petrol or a mixture one or the other with water. It appeals to me because it looks as though it has been fashioned by metal working  tools - and instance of nature reaching towards art.

In Sainsbury's a young man, aged 8 or thereabouts, shouts "Mum, can I get some pickled onions." He reaches up to ample display of pickles. "No, I said, no", says his Mother. Why is it that people's preferences, their likes and dislikes, always intrigue me, regardless of whether I share them? Others I  know have found pickled onions addictive. For myself, I can take them or leave them. I have some sympathy for the boy though. Onions are a relatively innocent vice.

When rain falls outside the window I sometimes reach for Geoffrey Madan's Notebooks as a source of good cheer and wit. With the book opened at random on a day when more than on most I seem to feel my age, he quotes Jonathan Swift, who as usual seldom disappoints with:"No wise man ever wished to be younger."
Posted by Unknown at 4:32 pm

That young boy could start his best selling memoire one day with his Mum refusing yo buy him some pickled onions.

My Mom, on the other hand, used to give me a quarter to buy a gorgeous big garlic dill pickled cucumber as my reward for going to the store for her. I'd happily munch it all the way home That pickle has
become my "madelaine". Taking me back to those days. ;~)

I like that leaf and what you see in it. In some areas of our city, there are sidewalks that have leaf impressions embedded in the concrete and this makes me think of them.

That quote is a good one to remember.