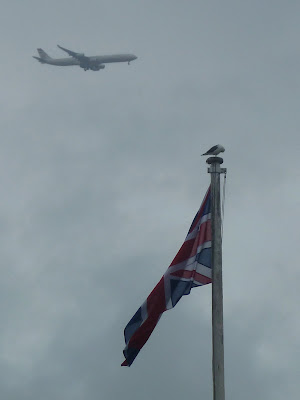 Flags, aircraft and seagulls all are said to fly which says a lot for the verb "to fly".

By  chance while looking up the plant called Fumitory, one variety of which grows out of walls in profusion in these parts,  I come upon  the delightfully named Melancholy Thistle. Its  botanical name is cirsium helenoides, or according to Geoffrey Grigson's The Englishman's Flora, Cirsium heterophyllum.  It grows largely in the north of Britain.  It is slender and unarmed being free of prickles. "It looks pretty, if a little sad in the mountains," writes Grigson "...At first the single flower heads drop and hang; and the mountain wind turns the Fish Belly leaves, which reveal their under-surface of white."  Fish Belly is a local name for the plant. "Did this melancholy look suggest that here was a plant good against melancholy?" asks Grigson, and quotes Culpepper in response: "The Decoction of the Thistle Wine being drunk expels superfluous Melancholy out of the body, and makes a man as merry as a cricket." If while in Scotland or the north of England I ever saw this plant, how I wish now that I had paid closer attention to it.

As I cut the hedge this afternoon I note with approval how a gap in the privet is being filled by the slower growing leaves of a yew. Is this part of the process by which hedges declare their age according to the number of  different types of tree found in a given stretch. A yew hedge is, how shall I put it, a wee bit posher than privet. Or so I have always thought.  I wonder how the two will get on in time.
Posted by Unknown at 4:56 pm

'Merry as a cricket', how lovely!

Are melancholy and depression just different points on the same trajectory or are they quite separate? Melancholy seems like a silk shirt one puts on to match a mood, depression more like a hair shirt one is forced to wear. The two ls (that's two lower case Ls)give melancholy a fine waveform.