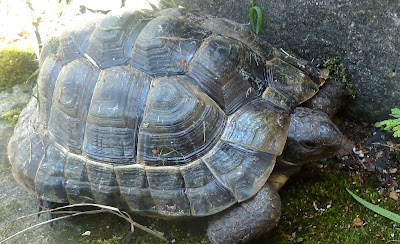 In response to Anon's request, that tortoise before Mrs P transferred him to the lawn whence we assume he took up  his abode in a shrubbery.

In London's Design Museum I sit in a chair designed by Heatherwick Studio.  It is made of rotational plastic moulding and looks like a sculpture  consisting of two inverted cones welded together with a base rather like a blunt spinning top. Its rippled surface resembles a seashell. At first you don't see it as a chair, but when you tip to one side its function is immediately apparent. You sit comfortably as though in a shell and can rock sideways without falling over, though at first its stability is in doubt.

Broad beans are suddenly plentiful in the garden. Only a few days ago the flowers seem to wither and the  beans not  to appear. I put the absence of germination down to a dearth of bees, but bees or no bees, there are  now beans for lunch prepared as the Spanish do with Serrano ham and a little cream.
Posted by Unknown at 5:00 pm

Handsome Tortoise........ but we don't KNOW its a male.
Well then, lovely Tortoise.

Good thing this isn't a turtle, or it might have been turned into soup long before it made it to the top of the steps - not by Mrs. Plutarch, of course, but someone might have had a hunger for turtle bisque. Just saying.