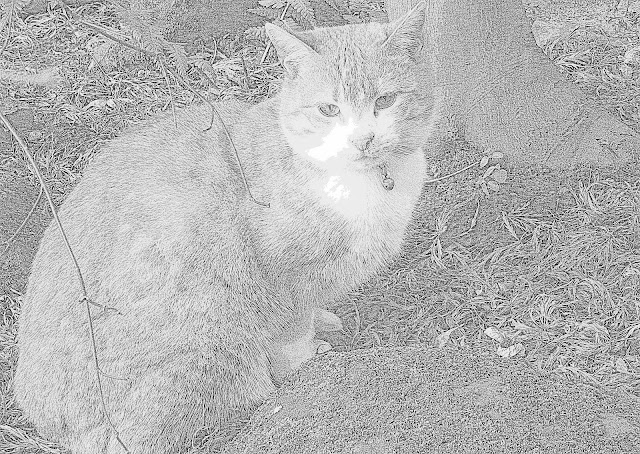 Today's wayside cat. If you think as Picassa seems to that this is a pencil drawing, it ain't. If I had  the patience, skill and time I would not draw like this, preferring instead spontaneity, liveliness and insight. Picasso rather than Picassa would be my choice. But given the opportunity I clicked the appropriate icons against the image of my original photo and here you have it.

How people park their cars is I have often thought a good an indication of  character. Some  one I know backs in everywhere assuring I always think a quick getaway. Others don' t give a damn jamming their vehicles (why do policemen always refer to cars as vehicles?) into any available space at an angle regardless of whether they are occupying the space of two rather than one vehicle or whether  they are preventing another vehicle from moving. As one who has not driven a vehicle for at least 12 years, moralising compensates me for the pleasures of motoring.

In my recent state of inanition (I  noticed the French form of the word the other day and not having used it  in English let alone French decided to do so at the first opportunity) I allowed three of the stories I have been thinking about to gambol in my floating thoughts. I will post the next one when there is evidence that enough readers (if Blogger stats are to be believed) have read the last one.
Posted by Unknown at 4:42 pm

Will never watch someone parking from now on without thinking of your comment.

Imagine this done on scraper board. By someone with the skill (and time) of an illuminating monk. The Illuminated Monk. Good name for a pub, though I'd need you to hold my hand if I were to avoid that awful state I fear so much.

Parking. This thought applies mainly in SE England. As the roads and urban streets clog up, and male show-offs are no longer able to travel at speed (or half-speed) parking with êlan becomes the new macho. The gods here are those who drive HGVs and start a rearward manoeuvre some hundred yards past their destination and thread their giants between cars choking up each side of the road into some courtyard to deliver - what would be most ironic? - a Cliff Richard CD. Drivers owning BMWs with an M in front of the model number, indicating they have spent 50% more on their Bucephalus than those without, attempt to ape their heroes and the aim is always "to do it in one", always backwards. Hoping there is some moralising scribe watching and that their exploits will be recorded in some famed work, yet to be published, called Parkers Lives.

You haven't got the Norovirus have you? Clearly named by someone who, as the phrase had it, had not gone "further than Biggleswade.

I have used "inanition" a lot on my own behalf and thought I had a clear definition in hand. But such conviction can be a liability in philology and I've crept privily to the dicker. Lack of food is the cause of the first meaning. I take it you are referring to the second meaning: the absence or loss of social, spiritual or intellectual vitality or vigour. Which is more or less what I thought and I believe clear evidence you are "presenting with" (note the delicious medico-jargon) the wrong malady.

Do you have many cats, CC?

Robbie I did imagine it and I didn't like what I imagined. Now talk of Durer. That's another thing.

I think I did have the Norovirus. I had it a couple of years ago. This time the symptoms were similar but much less intense. So may be I acquired some immunity. Better now.

I saw this the other day but didn't have time to comment. Wow, that's some image. Durer-like. It does look like a very fine drawing, almost obsessive compulsive. So, it is digitally manipulated and enhanced, I presume. I am curious as a cat about your program, Picasa is it?