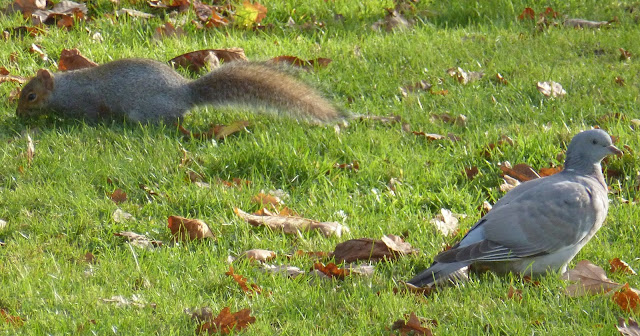 Neighbours. Probably the two commonest inhabitants of The Grove.

Huge snowflakes glide down outside the window this morning, as big as saucers they seem to be.

Despite snow on the line, I am no more than two minutes late for my meeting with the possessor of two noms de plumes so deeply ingrained that I cannot always remember the real name under which he now blogs. There, sitting in the bar of the Bloggers, Retreat is Barrett Bonden, Lorenzo da Ponte and Roderick Robinson. Problem is that I have always known him as "Robbie" so that for a time I find it difficult to adjust to the shifting spectrum of nomenclature. He, in response to a request which I forget that I made, is wearing his navy blue ship captain's cap. This doesn't make it easier as I cannot  in nearly 50 years recall  seeing him in any form of headgear.   An item on the agenda is to define the short story. It enters both our minds at one point  that maybe we are in the midst of one. After nearly six  amusing hours of failure to define the short story and much else, we part company; he into the bowels of the London tube, and on to the distant Welsh Marches; I to the heights of Waterloo East Station and on to the fleshpots of Tunbridge Wells.

The Welsh Marches do sound distant, don't they. More distant certainly than Hereford. Also the destination suggests I don't have a permanent residence. Thank goodness I had a hat.