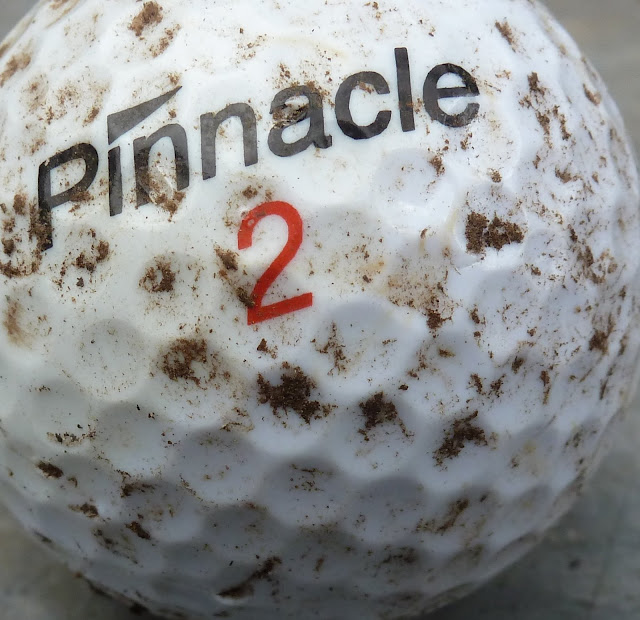 This strange  and rather beautiful object may be familiar. It is a golf ball. I find it of all places in the compost heap and you can see the compost still clinging to it. How it got there I do not know. You don't have to be a golfer to be seduced by it.

The short film  about a world without books which  Herhimnbryn  mentions in her comment yesterday brought a tear to my eye. Hall's Bookshop has been a feature of Tunbridge Wells for many years. And has long been a favourite of bibliophiles world wide.  Some years ago the bank next door which owned the lease were refusing to renew it on the grounds  that it wanted to install a cash dispenser. Protests came from far and wide, Good sense prevailed and the bank renewed the lease. But it was a near thing. The  film which is skillfully made and acted with charm and aplomb,envisages a time when there are no more books. The  last scene shows the Hall's we all know and love hideously boarded up, its windows blank and the outside display shelves gone for ever. A nightmare scenario as though the bank had won.
Posted by Unknown at 5:45 pm

The golf ball photo is amazing. At first you wonder what it is you are looking at and the single word against the cratered surface seems to have something to do with space travel.
I have not seen the film yet but it sounds excellent. The film Fahrenheit 451 is also about a world without books and is very moving.

Once I played golf. I lost lots of balls. It is quite conceivable several of them ended up in compost heaps. Certainly, many plopped into pools, lakes and rivers never to be seen again. Eventually my back intervened and perhaps it was just as well; I wasn't very good. However, one scene was memorable. It was winter and my ball, still carrying some velocity, bounced on to a frozen mere and skated on, endlessly, surrendering only tiny amounts of energy each time it bounced. Physics was to prove a longer lasting comfort than golf - still is.