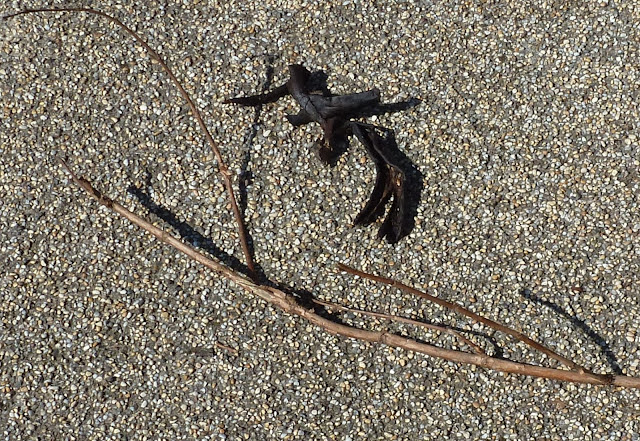 An interest in abstract composition leads me to watch the ground to see what chance has arranged. Is that a banana skin, blackened with age above the stick? Or a leaf.  I don't bother to look any closer. It might  spoil things.

As I have already mentioned the Spanish green  peppers called pimientos de Padron are just now available in Sainsbury's. They look like chili peppers but though they have a distinctive flavour are not hot like chilis. I first tasted them in a tapas bar in Galicia and later in a bar in Madrid, but I never expected to find them in England. You griddle or fry them with plenty of salt until they begin to brown and the skin bubbles. They are worth looking out for. Apparently I am not the only enthusiast. A man ahead of me takes three  packets from the box on the shelf in Sainsbury's  and when I have done the same he takes another.  There are hardly any packets left.

In a basement window a woman paints her finger nails. All I glimpse as I pass is her head bent over spread fingers above which her other hand hovers with a brush.
Posted by Unknown at 5:10 pm

Confession - bought the last three packs of Pimientos de Padron in Sainsbury's on Friday morning. First discovered them in a bar in Santiago de Compostela almost 20 years ago. Possibly addictive.

Did you find this banana peel lookalike(?) under an ash tree?

Sandra Good for you. Let's hope Sainsbury's keeps supplying them. When I first encountered these pimientos every now and then you found a sharp one (sharp like a chili), which added to the fun. The Sainsbury supplier seems to offer only mild ones.

Elena I am sure you're right. But the nearest ash tree as far as I know is at some distance. I was looking out for ash in the Autumn because of the die-back disease which is beginning to threaten ash trees in this part of England.