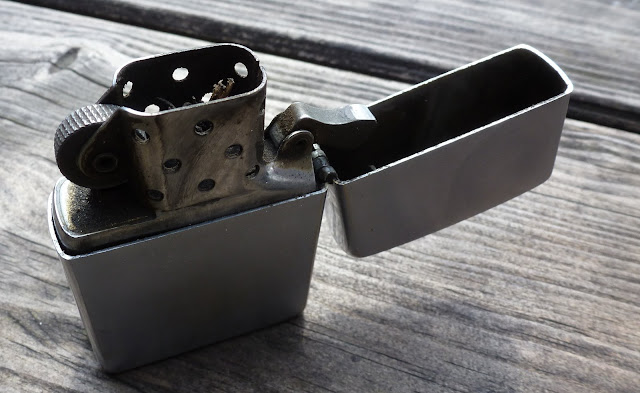 I don't smoke. When I used to  it was only because I liked the procedure. Opening the packet of cigarettes, lighting up, watching the blue skeins of smoke writhing and vanishing.  "Lighting the next one with the last one's sunset", I once wrote romantically.
I didn't realise that you were supposed to draw the smoke deep into your lungs before exhaling, or that you were could derive pleasure from the effects of the nicotine in your bloodstream. Perhaps just as well.
The idea of smoking meanwhile still attracts me. I love watching period TV series such as Mad Men where people smoke in offices and at home almost by reflex. And the image of Lauren Bacall lighting two cigarettes one for herself and one for Humphrey Bogart who is driving still strikes me a  sexy although the word sexy probably didn't exist at the time the film was made.
Which brings me to this Zippo lighter a classic design, close to, if not beautiful, which goes back to 1933, the year when I was born. True it smells of lighter fuel when you use it but its simplicity and ease of maintenance is something to nurture. This one belongs to my friend Geoff, who rolls his own cigarettes, and drinks Guinness slowly and persistently, missing little that goes on outside The Compasses with his bright blue eyes. I often think that if anything made me take up smoking again in my 80th year, it would be the satisfaction of lighting up with a Zippo.

A few minutes ago a man came to the door. He said that his company which sells garden furniture was moving its warehouse and that it was selling garden furniture in the neighbourhood at a discount price to get rid of unwanted stock. We didn't need  any. He went on his way. It was only as he left that I remembered that I had seen the man before, a  year ago when he  called at the front door with the same discount offer and the same explanation.  I believe they call it marketing.

In the capital of the Corinthian column set into the wall of the house opposite our bedroom window starlings are nesting again. The column is entirely decorative but its ornate capital provides perfect nesting crevices. A scene to watch, over a morning mug of tea.
Posted by Unknown at 4:46 pm

It is amazing how the design of the Zippo lighter has changed so little across the decades. A nice close up (is it micro or macro?)of an iconic subject.

My Dad was a smoker (Lucky Strikes) and was never without a Zippo. He had several in his lifetime - either he was replacing ones he lost, or was buying a new one for his collection. His favorite was one given to him by the company he worked for, Grinnell Corp., after bringing in a construction project under budget and ahead of schedule. It had the head of a longhorn steer, in brass, on the cap, and his name engraved on the body.

He taught my younger brothers and me how to clean a Zippo, refill it, put new wick in and trim it, plus those little red things (flints?). To this day, the smell of lighter fluid and the characteristic ringing sound when the cap is flipped up (not all that common anymore) take me back to those days.

Some things you never forget, nor want to, I think. Thanks for the reminder of those times, Joe.