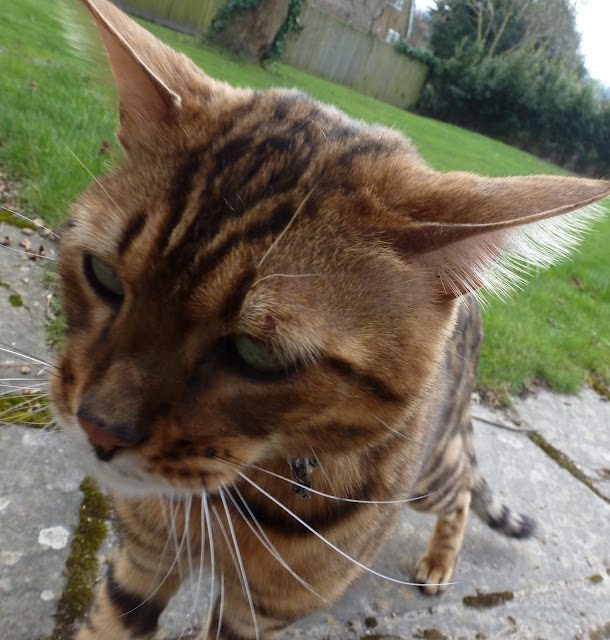 Since I have been informed of its distinction here is  another photograph of the Bengal cat as  I now know it to be, which visits  me in the vegetable garden.

"Have you ever thought of owning gold? "asks a direct mail shot which offers to sell me one or more of  the latest  issue of sovereigns from the Royal Mint? Sometimes but not for long. Even if I could afford a hoard of sovereigns I have mixed feelings about gold. Midas and his uncomfortable fate haunts me as does that poor girl murdered by being painted in gold paint in Goldfinger before James Bond could save her.  Gold has risen in value by 140 % since 2007 and could well go on rising. And sovereigns don't attract VAT or Capital Gains Tax. So for manipulators of capital  where little else appreciates in value, it could be a good bet. And then there's something rather beautiful about the metal isn't there? Above all the sense that it doesn't tarnish and  glitters for ever in the dark or in the light. Beautiful but poncy. Gold is not for the modest and I am all for modesty and circumspection in these critical times.

I don't usually read thrillers unless on holiday. But the cold weather which has restricted outdoor activities provides an excuse for me to read one called Gone Girl by Gillian Flynn. It certainly keeps me riveted for a day or two, but none of the characters is particularly attractive and attracts little sympathy. When I reach the end - and here is the only reason to mention it - I find something new in a paper back novel.  At least new for me.  This is a  section called Reading Group Notes consisting of topics for discussion and an interview with the author about her views on them. So absorbed was I in the story that for a moment I think that is  yet another unexpected dramatic device. Something I decide that I can do without.
Posted by Unknown at 5:38 pm

Many, can't remember how many, maybe 30 years ago we could walk into the Guardian Trust in Montreal and ask the teller for silver and gold. I had bought 1 once of gold and 25 ounces of silver for the heck of it. The actual stuff, not on paper. Don't know what happened to Guardian Trust but know what happened to my gold and silver - it was stolen at the same time as lots of jewelry. My insurance broker said "this is not a burglary with forcible entry, this is a walk-in". He arranged for me to get paid anyway. Never locked my house in the woods and still don't lock my apartment now.

Upon enlarging BC's photograph, I notice a puncture wound and a swelling on his left upper lid. Clues to an infected puncture wound, which indicates an altercation, which suggests another cat, which leads me to conclude Mr. BC is a tom and he is patrolling his territory. Your vegetable garden would seem to be part of his territory, as are you.

His ears flattened slightly there in front and his sidelong glance from under half-closed lids are his way of advising you he is top cat, should there be any doubt in your mind.

Or, maybe, he's on the lam and doesn't want his picture taken, lest someone recognizes him and sends him back to the hoosegow (is that spelled correctly? I don't know).

Thank you Crow and Ellena. Two for the price of one, as they say in our supermarket. Funnily enough when I fantasised about buying a couple of sovereigns for around £300 each, it occurred to me if I did I would have to worry about their being stolen.

As for the Bengal' history, Crow, were you ever in the police? That's a brilliant piece of forensic work and observation. If I could afford sovereigns and a Bengal cat I would ask your advice about how to protect cat and gold from marauders. What is a hoosegow? Even if I knew it is unlikely that I of all people would know how to spell it.

Hey, my spell- checker failed to pick up housegow. You spelt it correctly. A prison. Thanks.

Joe, at age 38 I went to college, where I studied (among other things) crime scene investigation, evidence collection techniques, private security, risk assessment and management, and forensics, earning a junior degree (AS) in Criminal Justice for my efforts. My plan was to re-apply to the US Postal Service, from which I had just resigned a couple of years before, to become part of their Inspection Service. By the time I graduated, I was too old for entry level positions with the Inspection Service, to my sadness. It didn't matter that I had been a postmaster for the last 8 years of my employment, which should have given me a leg up on the other candidates. I was already too old when I entered college. So it goes.

Free advice (it's worth what it costs): Keep your gold in a bank (or two) you can trust. Implant a chip in your cat's scruff where he/she can't get to it, tattoo its ear or inside one of its hind legs and photograph its markings. The last thing you'll ever need for either of them is the first thing you should buy for them - replacement value insurance...although if the cat has wormed its way into your heart, there is no replacement for it.

I've been owned by a number of cats over the years. They've taught me a lot about cat behavior...sometimes, the hard way!

Thank you for the compliment.

Thanks for the advice, Crow. I shall bear it in mind in the unlikely event of gold or a cat coming my way. I haven't been involved with a cat for many years but I take great pleasure in watching them. I am deeply impressed with your CV. I will hire you without hesitation to take charge of security in the empire I am planning to build as soon as I have a spare moment.