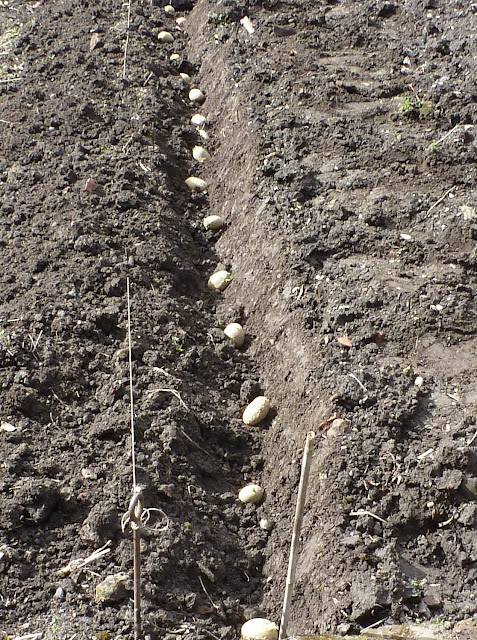 It seems a supreme act of optimism  to sow potatoes this year after last year's disastrous crop and in this year's icy spring.

They were talking in The Compasses about a couple who came in on Saturday night when the place was awash with revellers and asked if they served hot chocolate. "This is a pub," said the indignant landlord. "Next thing you'll be wanting is biscuits and a blanket."

Ellena's comment on Ficaire drove me to my prized copy of Le Petit Robert.  First it indicates a link with "ficus verrue", a wart or verruca, (Ellena's ampoule, I suspect) accompanied by the words "it is believed to be a cure for them".  It continues petite plante de printemps, à fleurs jaunes. It continues to say that it is called "false ranunculus". Ranunculus is of course the generic name for buttercup, which the flower of the lesser celandine resembles.   But that is not all.  This wonderful dictionary invariably gives examples of  usage. Hence,  "La ficaire est appellée faussse renoncule, éclairette "Les ficaires vernies,  étoiles jaunes parmi les feuilles grasses, dont chacune a la forme de coeur." "The lesser celandines, varnished yellow stars among  plump leaves of which each has the form of a heart."The quotation  from Genevoux (who he?) describes the plant perfectly right down to the heart- shaped leaves. To get back to Robbie's original comment, ficaire is alas not nearly as pretty a word as chélidoine, defined in Collins Robert as "greater celandine, swallowwort". The egregious Carol Klein and her co-presenter Monty Don were talking about the culivated as well as the wild variety of lesser celandine but should I think have made the distinction.

The "varnished" quality of the yellow is clearly visible in your photograph. The colour rendition is excellent.

Ah, the myth of the so-called hospitable British pub landlord. The most advanced version of that breed presided over the touristy The Doves at Hammersmith. There the rules, issued peremptorily, exceeded the number of pints pulled. He even went as far as writing an autobiography, available in the public library at Barnes where we lived for a time. If memory served it ended with something like: nowhere in the world can you be assured of as warm a welcome as in a British pub. As warm, in fact, as the welcome the German troops enjoyed at Stalingrad.