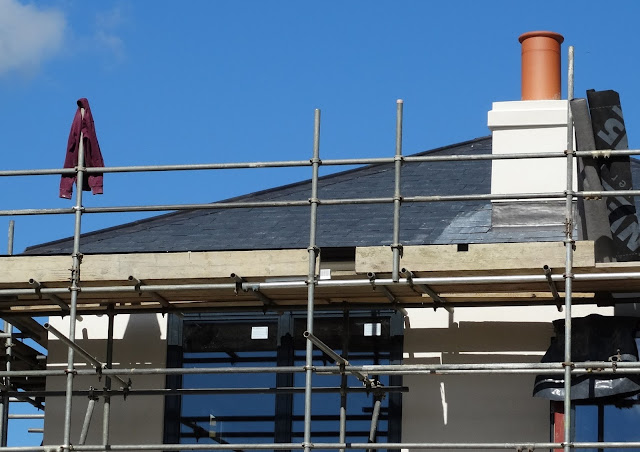 The new house next door to the vegetable garden is nearing completion.

BLT stands for bacon, lettuce and tomato. It is a sandwich which as far as I know originates in the USA.  Reference to Google images, will confirm that it is invariably made, apart from  tomato, lettuce with a mayonnaise dressing, with rashers of crispy bacon. Someone I know is a fan, and chooses it from a pub menu whenever she spots it. I mention it because of a second  restaurant experience from which lessons might be drawn by restaurateurs.  (Remember the mobility scooter which crashed into our table the other day).
We are sitting outside The Crown at Groombridge when the BLT is served. After an initial foray the complete absence of crispy bacon is apparent. It is returned to the counter, with the polite observation that instead of the bacon the only meat seems to be thin strips of cooked ham mixed up with chopped tomato, lettuce and mayonaise.. It is bacon I am told. "I'll ask the chef. If it is bacon  you are  going to have to pay".  The question of payment has not arisen  and  as far as I am concerned, will not arise.  It is not the issue. The thing is that the guest in question, as most people familiar with the delicacy would be, is expecting crispy bacon rashers. "Chef says it is bacon," says the young woman at the counter. Now I know very well that technically it might be called bacon as in the cooked bacon or ham hock that is sold in butchers. But  the customer is proverbially always wrong, or is it the other way round? Either way  I am not going to enter a debate about the chef's interpretation of the term or of the recipe for BLT. So I let it rest. And that is today's beautiful thing. Why spoil a summer day, some drinks in the sun and the pleasure of good company for the superior knowledge of an aspiring Escoffier? My beautiful thing is not to react. Until now, I suppose.

I know that herons nest in the  trees on the bank of the lake at Groombridge.  Today, ranged at equal intervals  on bank are four  standing on on their long legs among the reeds. I photograph them and their reflections in the still water for future reference.
Posted by Unknown at 5:35 pm

This wilful reduction of a BLT to mere semantics ignores the BLT's origins. Surely it started life as a bacon sandwich (where, as you say, the bacon would be recognisable because of its crispiness) to which other elements were added. The lettuce and tomato might subsequently be modified because they are a form of garnish, but not the bacon. Imagine a hamburger with the patty replaced by a smear of Shippam's meat paste - and the for the same reasons: to save time and money. Did the four of us once eat at the Crown at Groombridge? A nice location but, if the answer's yes, a place to be avoided given the chef's cavalier attitude to culinary tradition.