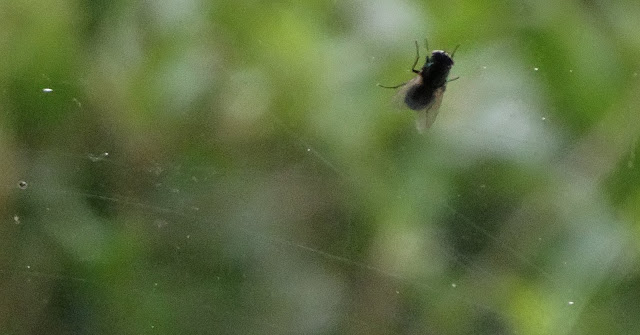 No way out. This is not a deliberate photograph. I pointed the camera at the window while testing it, without noticing the poor fly.

After the rain heat, after the heat rain. After the rain abundance, an embarras de richesse . While my back is turned courgettes (zucchini) become marrows. Butternut squash plants, with similar but smaller leaves and less conspicuous orange flowers, send forth their tendrils and infant gourds among  them. Likewise ridge cucumbers invade in all directions mingling their prickly green fruit with dill and coriander. The little gem lettuces are bolting like leafy mountains. The sweet corn Runner beans clamber over the top of their 8ft poles, while bees nuzzles their scarlet flowers.  Radishes, which I should long ago have pulled and discarded, are in flower. Fennel and dill throw their yellow umbels towards the sky. The swathes of wild flowers planted to attract them  swarm with bees and butterflies. This is a busy garden. Too busy perhaps. Far removed from Andrew Marvell's green thought in a green shade.

In the fishmongers a grandfather accompanied by two small children is waiting for his purchase to be filleted. Behind him a lithe, half naked man with tattoos is doing a sort of dance between a cold display shelf on one side of the shop and dry goods shelf on the other. He collects a carton of jellied eels from  one, a bottle of vinegar from the other, opens the carton and dresses the contents with dollops of vinegar. He noisily explains his purpose to his wild looking girl friend, who slips away, having dropped a carton of some other crustacea into her bag. The tattooed man meanwhile tastes his eels and disappears through the door. "Did you see that? Did he pay?" says the grandfather to the fishmonger as he returns to the counter with his fish. "He'll probably be back," says the fishmonger unconcerned. "He usually comes back."
Posted by Unknown at 4:46 pm

Your description of this intense summer's extreme effect on the busy garden makes fascinating reading. I enjoyed the description of how the bees and butterflies play their part, as do the flowers of plants which we think of as "vegetables."