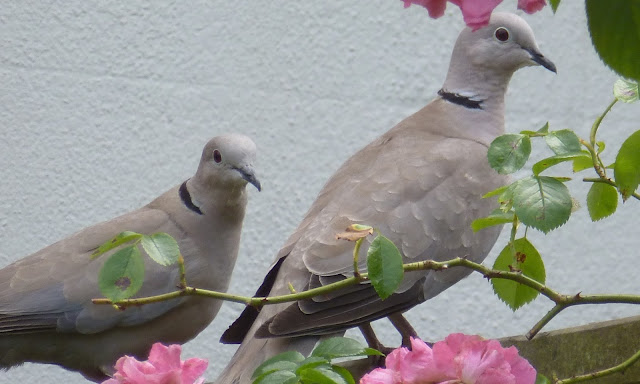 Collared doves among the roses in the garden of some friends who feed them so regularly they have become family members. Though discouraged they wander in and out of their kitchen. These delicate birds are new to the British Isles. The first pair bred here in 1956 and quickly multiplied so that there are now believed to be 230 000 pairs. According to the The Royal Society for the Preservation of Birds the collared dove is the seventh most commonly seen bird in British gardens. Matched with pink roses they seem to  belong to a tapestry or or to a pattern for chintz curtains.

Indignation about the misuse of English words  often lies in the territory of crusty old people who don't like change.  I tend to be wary of  protests about usage because language evolves; a word begins with one meaning and with time adopts newer quite different meanings which repeated use eventually makes legitimate. How to balance precision and accuracy against  natural linguistic evolution? I ask myself the question this morning when on The BBC's Today Programme, I hear the word "cynical"used twice on separate occasions when each time the speaker seemed to mean "sceptical". There can be no doubt of the difference. The one implies  distrust or incredulity of human sincerity or goodness, while the other suggests an inclination to question or challenge accepted opinions. Cynics are thought of a having little faith in their fellows while sceptics may be admired for a balanced and moderating influence on affairs. The confusion between the two words is now almost an epidemic.  So is the language changing? Or did I hear this morning  professional communicators who should know better using it with a reprehensible sloppiness?

A rare example of onomatopoeia applied to something essentially abstract is the French expression et patati et patata meaning "and so on an so forth"
Posted by Unknown at 5:19 pm

Well, I think I probably veer towards the crusty old people who don't like change to the language. I don't call it change, but degradation. The particular area which bothers me is where the use of scientific/mathematical language is 'misused'. The one that immediately comes to mind is that used by sporty people; "He/she gave 110%" No such animal exists in mathematics!

I always thought that the idea of language was to facilitate communication and understanding. How is that achieved when the language is continually changing? I do find from time to time that I have no idea what homeland Brits are talking about anymore.

Beautiful Collared Doves and comment on how Roses enhance their charm and vice versa.

I am not a crusty elder, but I live in the American torture chanmber of English, from pronunciation to misuse as you have described to "fun" as an adjective... as in something being "so fun".........

Ah but suppose another language has a word that doesn't exist in English - don't you feel the temptation? Two examples: préciser in French and, somewhat outmoded now, cinch in American.

The fact is some words have complicated meanings Not everyone looks up dictionary definitions, relying instead on context. Laziness? Hey, nobody's looking, the word police are on a tea-break. Oh my goodness I've gone and corrupted the English language and the court's condemned me to eat half-a-dozen Jeffrey Archer books. You're way ahead of me with cynic (though I wouldn't confuse it with sceptic) but how about hermeneutic? Looked it up several times and still can't cling on to the meaning? Shouldn't use it then. It's banned. Speaking as one who requires linguistic absolution most days of the week I wish I could say I've never used a word casually and/or inaccurately. Or just plain wrongly. Why do I do it? To show off, of course. Virtually all writing is showing off. But what happens if I'm found out? It's a risk I'm prepared to take. And if the risk doesn't come off I'll devise a charming rejoinder. And there, right in the midst of this act of de-solemnisation, I'm guilty of the very error I'm outlining. Have I ever looked up rejoinder? Can I be sure it hasn't got some nuance I'm unaware of. Bless me for I have sinned...

Pretty collared doves. Heather had a pair in her garden which sat in the apple tree summer and winter. The day she died they flew away and haven't returned, though her son has put out food and looks out for them.

I've little new to add to the debate on linguistic change; I've sometimes wondered at what moment Elinor became the sensible one of the Dashwood sisters and Marianne ceased to be, and whether anyone got cross about it. Oh, and I did just catch Henry James misusing your friend 'begging the question', which was really rather satisfying. (Or perhaps that should be gratifying... or simply pleasing.)

I am intrigued by the fact that, according to the dictionary, a Cynic in Greek Philosophy was someone who believed that the most important thing in life was virtue and that the only way to attain to virtue was through self control, which paradoxically seems to be a very uncynical view of life.

Tom The young in particular are often completely incomprehensible. They gabble and swallow their words. But even if you could grasp them their tangled meanings elude us.

CC Fun as an adjective! Grim! But then we have I suppose had funfair for some time.

Lucy I always thought that the theme of the novel was a kind of definition of the two words in the title. One sister sensible but sensitive and emotional. Have I missed something to get cross about? Interesting about Henry James begging questions!

Robbie I suppose that happens quite a lot. So we have to borrow or adapt.

Lucas. Yes the Cynics appear not to have been cynical on the whole.