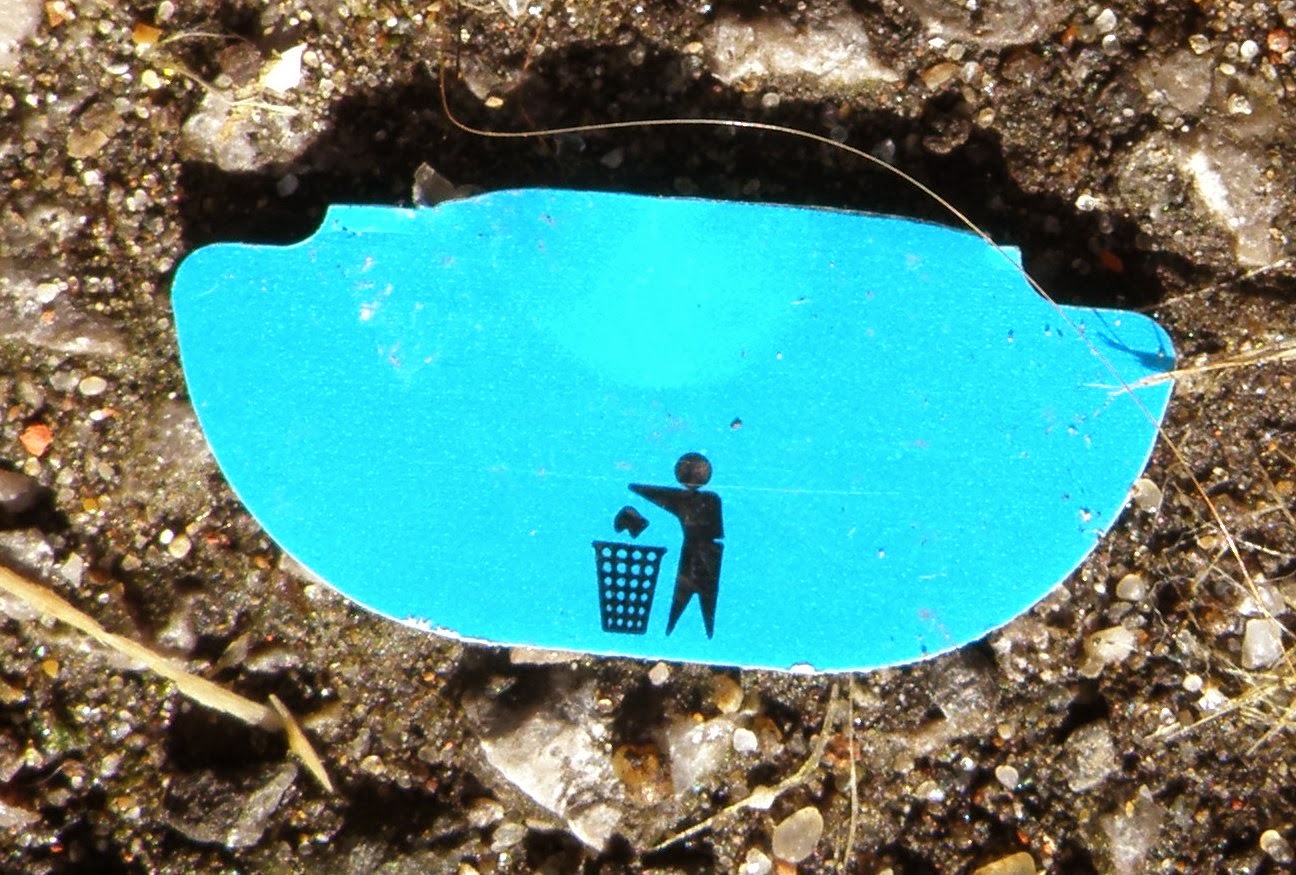 Among fragments of rubbish lying in the street which I formed the habit of photographing a couple of years ago, this one of the tab of some sort of package appeals because of its ignored tidiness message, and  because of the curious lake-like appearance  and colour of the background.

Never a contributor or believer in new year resolutions I am struck by a woman talking on the BBC World Service who resolved to do something for the first time every day of 2013  and succeeded.
Among her achievements was to talk to someone new on the spur of the moment and do a "polar bear plunge" (ie jump into Arctic waters and totally immerse herself). Both proved rewarding she says as did her 363 other ventures. I am almost tempted to follow suite in 2014, if only I were half my age.

Among the expressions I vow never to use is "to be honest". First because honesty should be taken for granted and, second, because can you ever claim to be honest, really honest?

First time I comment on your blog this year. I bet you could come up
with all the 'firsts' needed without getting up from your chair.

We all hide, or keep, things from others for a variety of reasons. I think the intention to be honest should be taken for granted. True honesty sometimes takes more effort, involves soul searching, and is not always readily apparent, even - especially - to oneself.

One thing I'd like for some people to make as a new year resolution, is to stop using the expression, "I'm only human." Like you, I do not make such resolutions. Why start the year as a failure? It's just being silly to yourself.

One thing I'd ban for ever is paralytic drunks, and other deranged people, making submissions to the, "Please prove you're not a robot" word verification system. :)

A good capture, the photo!

There are a lot of rather mindless expressions used in light conversation, to be honest :-)

One of my colleagues used to say "To be quite honest.." but he used to say quite in such a way that it sounded as if he meant quite as in only quite i.e. not very. This used to fascinate me.
The lake of tidiness in an arid landscape of rubbish is indeed a good capture.

I know a lady who often says, "You ain't gonna like what I'm gonna tell you now, but actually ...." More often than not, she comes up with a lucid note. I appreciate her thoughts because they are blunt and honest and insightful. I wish I had more people like that around me.

A brother-in-law of ours says it all the time, with a Cardiff accent 'To be perfekly arnest...'. It is usually followed by nothing revelatory or remotely important, it's just a kind of verbal tic. Almost always when we refer to him one of us says it in his voice; it's become his call sign. I've come to rather like him and so find it quite endearing.