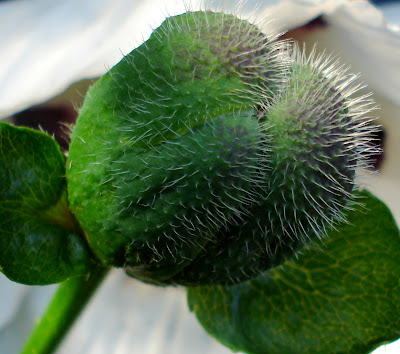 The bud of a poppy. Is the promise of the bud more satisfactory than the flower? It has more weight, more substance though it will turn fewer heads.

In the video hire store, Andre and I talk about Woody Allen, whose film Vicky Christina Barcelona has just been released as a DVD. Andre is an Allen fan. "He won't make any more really great films, like those he used to make. Every year there was a masterpiece," he says. "His problem is that that he wants to be some one other than himself." He wants to be Ingmar Bergman, we agree. It's so often the case with artists and musicians. Like Sir Arthur Sullivan who, not content with the Savoy operas, wanted to be Verdi, we say.

Friendship. In the magazine called The Week. there is a photograph of Sophie, a Springer spaniel and Bramble, a young eagle owl. The two have been inseparable since Bramble was brought into a bird of prey centre in Liskard, Cornwall, as a chick. The bird triggered the maternal instinct of the three year old Sophie, who began to clean it. Now the owl, old enough to live outside, still flies into the house every day, sitting still while Sophie licks her. The photograph shows the spaniel and the owl side by side, staring into the camera, with serious expressions on their faces, as though they know that they are special. And they are. I find the story, like all stories of unusual friendships, very moving.
Posted by Unknown at 2:05 pm

I love stories like that too, about the owl and the spaniel. I'm going to see if I can find a photo of them on the internet anywhere.

Dissatisfaction, how much is a good thing? I often find myself exasperated by it, but I do wonder if it doesn't provide a certain drive, and wonder if it's a shortcoming not to have more of it. Wishing to be someone else can only be a mistake though.

I'll try to email you a copy of the picture.