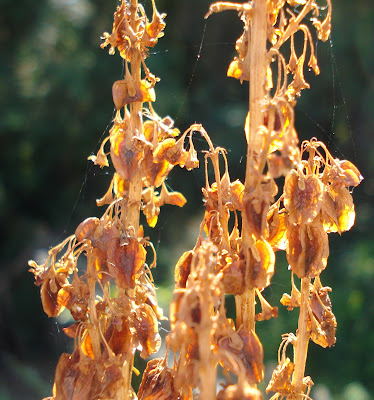 Seeds of ruebarb (like their leaves now red spotted with green) have a sculptured quality, helped here, in their coppered splendour, by the finest threads of spider silk.


Years ago I had an account with a building society called Hastings and Thanet. The paying-in book would be returned to me inscribed in longhand. Later, Hastings and Thanet was taken over by Cheltenham and Gloucester and changed its name accordingly. Now I learn that Cheltenham and Gloucester, which has for some time belonged to Lloyds Bank is to close its branches in the Autumn. For the time being the name remains the same, but I will have to walk further up the hill and attend the nearest branch of Lloyds for transactions. There was a time when banks and a building societies were very different creatures. Sic transit...


A neighbour complains about another neighbour, who is in fact a friend of hers, that he scattered a packet of poppy seeds over her front garden. I didn't want them there" she says, being of an orderly turn of mind. But now that the scarlet poppies are flowering above and in the midst of her lavender hedge, she would have to be mean of spirit not be glad of his profligacy.

I would question whether banks, or even their once-slightly-more-honourable siblings, building societies, could ever have been regarded as one of the glories of the world. That said, we live in the very heartland of C&G territory, and the disappearance of their branches (prefaced by a hideously canting letter explaining the rationale) is a loss that somehow strikes even harder here in the Marches.