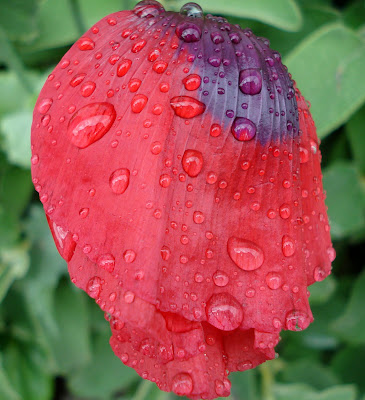 This poppy closed for the rain, its petals serving as an elegant umbrella.

Swifts are, according the Royal Society for the Preservation of Birds, scarce in England this year. I have seen and heard a few in Tunbridge Wells, and, today, spotted two or three, above the church in Forest Row. Not enough of these magical birds, which appeal so much to the imagination. They spend most of their lives in the air where they sleep, mate and feed. They come down to earth to nest only when raising their young, and can spend as long as two years aloft without landing.

Old people dancing is the subject of the TV programme Imagine last night. It is follows the rehearsals of the Company of Elders, a dance company, whose members are aged between 60 and 85, and who perform internationally. Even, if you do not, as I do , fall into that age group, you are going to be surprised at the grace of their performance. In one respect age and experience help them project the emotions which the music and choreography demand. "The more you mature, the more you have something to say," says Simone Scotto, the company's rehearsal director, and as you watch the withered faced come to life and the stiff bodies relax in their tender routine, you understand that what they are doing is more than worthy self-indulgence.
Posted by Unknown at 4:43 pm