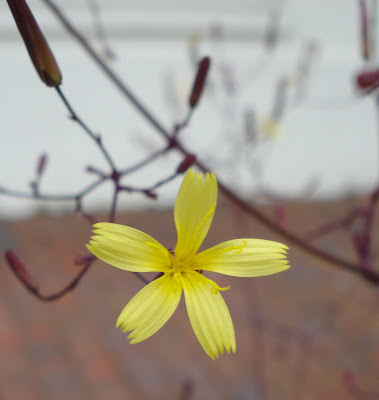 This plant which grows out of walls and cracks in paving and rocky places is known as wall lettuce. Its latin name is mycelis muralis. It often has purple stems and handsome, serrated leaves with triangular end lobes. It doesn't rate a mention in every wild flower book, which is surprising because it stately habit deserves attention. According to Roger Phillips' Wild Flowers of Britain, you can eat its leaves as a salad.

"Its luscious, vegetal aromas are suggestive of lemon peel, lemon verbena, tomato leaf ... The flavour develops in the mouth, progressing from a velvety start through to an explosion of green impressions underpinned by an elegant bitterness and a cheeky, piquant finish". Tasting notes, yes. But if you said that they concerned wine, you would be wrong. In fact, it is olive oil, which is being described; to be precise, an oil pressed from the Abequina variety of olive. These notes among others are taken from a magazine called Spaingourmetour, which contains lavish photographs of Spanish food, drink and countryside, apart from some succulent prose.

Heidi's birthday takes us to the Tunbridge Wells Bar and Grill to sample her favourite king prawns cooked in batter in the tempura style, and a bottle of pinot grigio tinted a pale pink, which earns it the name "blush", a description originally used to describe pink wines in California.Our French waiter says that today is also his birthday.
Posted by Unknown at 3:36 pm

Happy birthday, Heidi. It's my sister's birthday on June 28.

Heidi: Frohliche Weinachten - no, I think that's something else. Anyway, best wishes and what a wonderfully period sounding restaurant for the celebration. Pinot grigio is supposed to be the coming wine after decades spent as a sharp-tasting joke. This is the first time I've heard of it entering the ever-expanding rosé field. Any good?

The food and wine sound wonderful, tempura is so lovely; what did you dip the prawns in?

Birthday greetings gratefully received. The prawns were supported by a hot chilli dip. The blushing pinot grigio, was right for the occasion and the food; it was modestly fruity and never too acidic. Reciprocal greetings for the 28th, if belated, to Clare's sister.