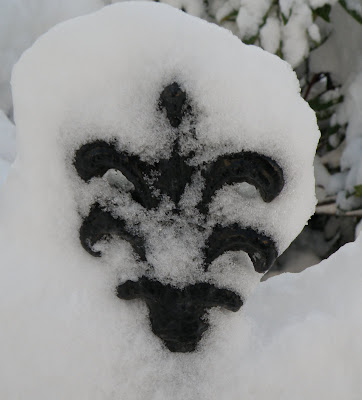 Snow-capped finial of railing across the road from our house.
.
Some languages have expressions rich and poetic, which belong to themselves entirely, and which you feel must tell us something significant about the perceptions and attitudes of the people who speak them. What other language I wonder more picturesquely (and might one say Gallic-ly) describes the twilight hour, than the French entre chien et loup, the half light when it is difficult to tell the difference between a dog and a wolf, and, by extension, between other creatures and objects flitting in and out of the darkness! It is as though a poem has formed in the language like a bubble or whirlpool in a stream.
.
In today's paper, the caption beneath a photograph of geese bred for the table - "necks on the line" - says it all. Taken at breast level and cropped to show a frieze of plump, feathered bosoms surmounted by long necks, orange beaks and searching eyes, the photograph prompts the thought: yes, geese have long necks.
Posted by Unknown at 2:23 pm

I call that time of sunlight "long-shadow time." It is my favorite angle of the sun, the clock-time of which changes with each season.

It creates in me an undefined yearning and a nostalgia for something unknown or unremembered - makes me feel emotional each time I'm out in it or watch it flow into the house.

The French express it just right.