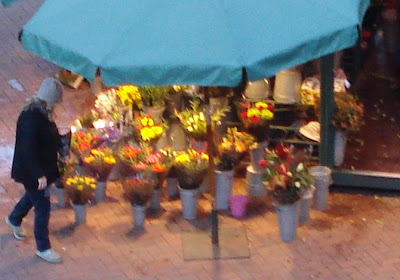 Snapped from Hungerford Bridge, the flower stall at the bottom of Villiers Street by the entrance to Embankment tube station.
.
Opposite me on the train an elderly man is correcting a type script. On the seat beside him is a travel bag. When we stop at a station someone wants to take the seat and he stands up with difficulty in order to lift his bag on to the rack. I offer to help but he persists in doing it himself. "My bones are getting old," he says implying that nothing else is. As the train draws into Charing Cross, I put my book on the table in front of me and open my shoulder bag ready to put it away. "Why are you reading Pericles on the train" he asks. "I explain that I am reading my way through all the Shakespeare plays in the Arden edition. "It is just by chance, " I say, adding how much I am enjoying it. Shakespeare only wrote about 50 per cent of Pericles," he says and adds that his wife is also rereading all the plays in the Arden edition. I tell him that when I was a child my father believed that the plays were written by Francis Bacon. We quickly agree that this is unlikely. "When would Bacon have found the time?" he says. And I say that Bacon has none of the playwright's range of spirit and imagination, least of all the Bard's common touch. Could Bacon have created Falstaff? "Have you got round to the Arden Merchant of Venice yet?" he asks. I say that I have. "Then you will have read my notes," he says "because I edited it." He says that the play does not seem to be very relevant to the present age." Why?" I ask. The morality and ethnic basis of the plot is no longer valid, " he suggests. "I wonder, " I say: "if you look further afield than England, perhaps it still is." The train comes to a slow, jerky halt at the platform. "That's true," he says, which is encouraging. But the train has stopped and we must go our separate ways. The entire conversation must have lasted three minutes. I have the feeling that it could have gone on for three hours.
As we part in the train's crowded corridor, I raise my hat because, though hat-less himself, he belongs to the generation which would understand the custom. It is easy discover subsequently that he is called John Russell Brown and that he has written and edited a number of books on Elizabethan drama . What I never get round to admitting is that, though I have been reading Pericles on trips to London for more than a year, I have not yet finished it. I have, in fact read more than half the Shakespeare cannon in the Arden edition, and come to a halt here only because, in pursuit of posts for this blog, I very rarely read on the train nowadays. Instead I look out of the window in pursuit of beautiful or interesting things, watch and listen to fellow passengers, and sometimes even talk to them..
.
Am I alone in only just realizing that the decade which is just drawing to an end has come to be known as the Noughties? Alone or not, I find it and the inescapable pun which it embodies sadly appropriate.
Posted by Unknown at 2:46 pm

So that's what noughties are! I've been coming across that a lot recently and wondered.

What a gem of a fascinating conversation on the train, too bad it could not go on for three hours.

I hadn't realised the conflict you face: can you really afford to spend time reading? True, beauty is to be found in books but it is, to some extent, secondhand.

A book is a very dangerous attachment when you're out-of-doors; assumptions are made and you may find yourself having to defend something you're reading merely through curiosity. The reverse of this is when the book is pulled out as an act of bragadoccio. Look at what I'm reading. When I flew back from the USA for my mother's funeral I did just that. My only book was Thérèse Raquin (in English) and we'd hardly got to cruising altitude before I discovered it to be unreadable. I needed the equivalent of your man to tell me why I should persist. As it was I learnt a valuable lesson and for the return I bought The Godfather.

This isn't the first time you've managed to find blogging material on a train journey to Tunbridge Wells. What's more, you seem to encounter kindred souls. Does estate agent rhetoric trade on this when houses are advertised there? And have you ever met "Disgusted"?

Showing off with books is something I hope I left behind a long time ago with my green and salad days. But I confess to doing so occasionally, until once I heard Dylan Thomas reading his poems with intervening chatter. I began to laugh and haven't really stopped yet, at his account of an American student, who after one of his readings, asked him: "I always carry Kierkegaard in my pocket: who do you carry?"

What an honor to meet John Russell Brown. I love his works on Shakespeare. Have you read "Shakespeare Dancing: A Theatrical Study of the Plays"? It is wonderful and Brown's joy and love for Shakespeare comes through on every page.