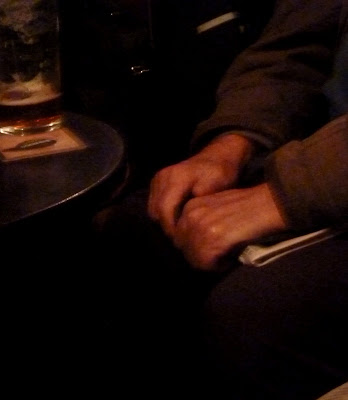 While engaged in conversation with Barrett Bonden in The Kings Head in Roupell Street, I happened to have my  camera out and took this photograph of the hands of a drinker sitting at a neighbouring table. I hasten to say that I was not distracted from the subject of our conversation. Rather I was seeking to illustrate a point.  But I'm damned if I can remember precisely what point it was.

One of the novels that I am reading at the moment is La Joie de Vivre by Zola. Among other distinctions it has two animal characters - a cat and a dog - which are conspicuous for their comparative sanity when compared with most other members of the dysfunctional family central to the plot. Apart from the little dog in Iris Murdoch's The Philosopher's Pupil (thanks for your correction the other day Lucy), I can at the moment think of no novels - at least those with a human rather than an animal theme - where cats and dogs are feature significantly in the cast of characters.  Apart from The Hound of the Baskervilles, there must be some. Any suggestions?

This damp and grey afternoon, I find myself for a moment alone in The Grove, apart, that is, from the two crows which always seem to be in evidence strutting about and pecking at the grass at this time of year.
Posted by Unknown at 6:00 pm

I shall give the animal characters some thought, I'm sure there must be some...

not a central character ... but one chapter of orhan pamuck's red is narrated by a dog

Jack London's White Fang? Which I read all of sixty-five years ago. Nope, I shall have to Google. (Pause for Googling)

Ah-hah! Much of the novel is written from the view-point of his canine character, enabling London to explore how animals view their world and how they view humans. White Fang examines the violent world of wild animals and the equally violent world of humans. The book also explores complex themes including morality and redemption.

Oh I can't tell you how proud I am of that although I must 'fess up and add that at ten years old I was unaware of the morality and redemption bits. Isn't memory odd - a sort of out-of-mind experience. Tiny fragments of the story are flitting by as if memory were insisting I should remember this book. And yet the arguably more meritorious Mr Sammler's Planet remains a blur. Always assuming I did in fact read it.

But then if you compared Jack London's ability to write vivid prose with Saul Bellow's the answer might explain the way my memory works. Is memory telling me that I'm no intellectual, that I should eschew the novels of intelligentsia and that i should simply settle down with a good read?

PS, I have absolutely no objection to your multi-tasking when talking to me.