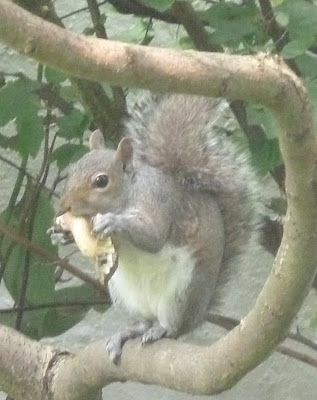 This afternoon in The Grove, a squirrel is eating a mushroom with frantic enthusiasm. While I am taking the photograph a man pauses behind me. "I have never seen that before," he says.  Neither have I. Is it, I wonder, an hallucinogenic mushroom? Am I an hallucination? Are you dear blog-reader, an hallucination?

We are lunching outside a Chinese restaurant in Sevenoaks.  Inside there sits an elderly Chinese gentleman. It is dark in the restaurant in contrast to the sunny exterior. The light glints on his glasses. From the pub opposite a young man brings a plate of very English-looking sandwiches into the restaurant and presents them to the man, whom I take to be the owner.

We are talking about islands. "I've been to the Isle of Man," says our friend Geoff. "But I didn't mean to go there." How did that happen? "I was drinking in the pub called The Vine in Liverpool and someone said there was a disco round the corner. So I went to look for it. I heard some music and went in search of it. Then I must have fallen asleep. I was drunk. When I woke up I was in the Isle of Man. I had walked on to the ferry thinking it was a disco.  Someone had stolen my wallet. I had no money to get home. I was about 18 I suppose. It took me a week to earn some money for the fare home".
Posted by Unknown at 5:42 pm

Now there's the plot of a good story, I'll bet: shanghaied to the Isle of Man. One way to import labor, I suppose.

If the owner of the Chinese restaurant was ordering lunch sandwiches from that pub....
seems maybe the pub is where you should
have been having YOUR lunch. Maybe not.

someone should interview that squirrel

FYI:
While Squirrels do eat mushrooms, the ones
they eat are NOT necessarily safe for humans. Who knew?