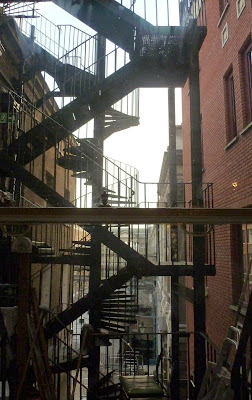 Whenever I go to the Bloggers' Retreat I like to take a peek out of the window at the end of one arm of the L-shaped restaurant. The view looking south across the river largely consists of this fire escape and the half landings on which are accumulated mops and buckets, old chairs and other detritus. I can never refrain from photographing it, if only  because it is a reminder of how the rear of buildings differ from the front. In one you see something approaching the truth and in the other what others would like you to believe is the  truth.

In the bay window of one of  the pair of bow-fronted 18th Century houses at the bottom of Mount Sion there has, for as long as I can remember - about 25 years -, been a model sailing ship peeping out from behind  partially drawn, dusty curtains. Today I notice that the window is empty and there is a "for sale" notice outside the house.

People who live in the same area all their lives are to be envied for their peace of mind and calm. At lunch time today  at The Compasses, Bill recalls  an old man in the Yorkshire Dales. He was nearly 80, he says, and he remembers him saying how "with a little old widow, he ran a few sheep nearby". Apart from a stint in World War 1 he had never left The Dales. He had not even been to the local towns of Leeds or Skipton.
Until a few years ago there were people  living here, in the so called "village area" of Tunbridge Wells, who had never strayed further than the High Street, let alone visited London.
Posted by Unknown at 4:52 pm

I remember thinking that if I'd brought a camera I would have taken the same shot. Then I looked again and I decided it was too much of a tangle, that it wouldn't have been worth the effort of pressing the button. You've proved me wrong, possibly by careful cropping; by containing the centre of the shot and using the stairway verticals as a sort of frame, you've imposed a symmetry (usually considered a no-no in photography) that works very well. I just haven't the eye for that sort of thing.

But I'm sure that you have the ear.