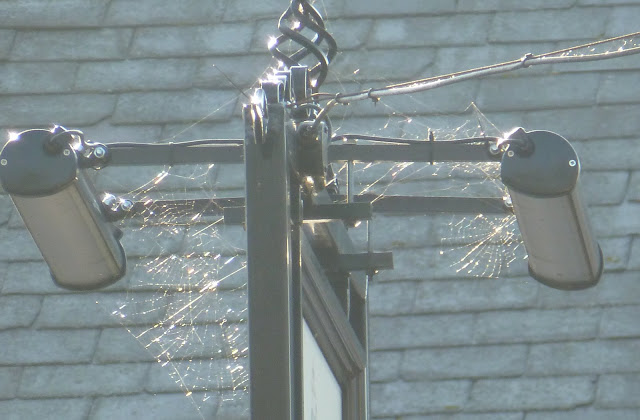 Do you believe that profitability is not the only criterion for the running of public utilities? And that certain public utilities like the railways should be kept  well clear of private ownership and the profit motive which drives it?  If so read the chapter called Railroads: a Case Study, in Tony Judt's polemic in favour of social democracy called Ill Fares the land. (Penguin).  It is made all the more haunting by the quotation from Marcel Proust at the beginning:  "Railways stations do not constitute, so to speak a part  of the surrounding town, but contain the essence of its personality just as upon their signboards they bear its painted name."

A tall girl wearing black leggings strides up the somewhat uneven, brick pavement of Mount Sion. Despite the cold morning, she has no shoes on her feet. Instead they are in her left hand. They are black and their long, narrow heels explain the anomaly of their position.

I've never worn high heels for more than a few minutes. Whenever I try a pair I feel like I'm learning to walk all over again - no graceful dancing or confident striding, just tottering around until I take them off in relief.

When I visited Japan once, I went on a hike near Kamakura and saw a young woman nimbly negotiating the tree roots and rocks on the path in heels. She was with her boyfriend, did not lean on him for support, just bounded forward, and I almost couldn't watch because I was afraid she'd fall. She didn't.

I've always admired stilettos worn with panache. It seemed like a tremendous sacrifice on the part of the wearer (as HKatz seems to confirm) and I felt my admiration was almost obligatory. My mother-in-law who, though poor, had dozens of pairs of shoes used to wear stilettos round the house, insisting that they were comfortable. I didn't care to argue this point.

HK and L de P I have noticed that there is a skill in walking in high heels with grace and dignity which, sad to say, few wearers of this histrionic footware bother to learn. It is worrying to see women so apparelled leaning forward as they walk to keep their balance and so transforming themselves into what appear to be old crones in need of a walking stick. There should be a school to teach the art of walking in stilettos.