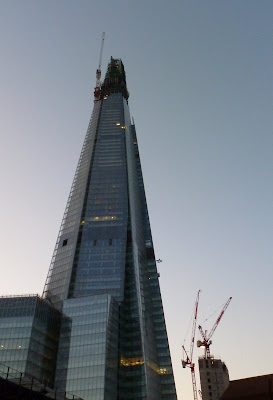 The new sky-scraper near London Bridge Station slices into the sky beneath a crane which dwarfs other cranes at work nearby.

At Charing Cross  without realising it I insert my return ticket into the automatic exit barrier instead my "out" ticket. The machine seems to  swallow the ticket without raising the barrier. I explain to an railway official and she lets me through. Only when through do I think of looking to see if  I  used the wrong ticket , which of course I had done. Back I go. "See if it's still there," says the young woman. It is lying there in all innocence spat out by the machine and I feel relieved out of all proportion  to the importance of the incident.

Twice in the last two days I am corrected in my pronunciation ( this is nothing to do with accent) of  the names of products. In the first instance without telling me that  I am wrong, a young relative twice says Riesling as though it were Reisling ( the first syllable rhyming with lies) after I have just used the accepted pronunication twice. And this afternoon, a salesman who says that he works for the company, pronounces Braun as though it rhymes with Brawn, after I pronounce it to rhyme with Brown.  I suspect that in this instance he is half right because almost certainly in English speaking countries, the German company accepts that it is unlikely that Braun would be pronounced as it is in Germany. Well I try.
Posted by Unknown at 5:09 pm

The saddest part about the ticket imbroglio is that the railway employee will have concluded that you are an innocent abroad in London, and that you don't know the London way of life. I am always keen to avoid being typed in this way on my rare trips to the capital and the minute I get off the train at Paddington I increase my walking rate by 50%, grazing people's elbows as I push by them on the streets.

Crow The shard, when it is completed will be one of the more satisfying new buildings on the London skyline.

L d P I think she thought I was an old fart who didn't know his arse from his elbow, and she was probably right.

The Riesling pronounced Reisling always annoys me, yet I am guilty of the Braun/Brawn error, even though I do know better, and wouldn't commit it if I were actually trying to read in German, or indeed if I were talking about Eva (which I don't very often).

I suppose arses do just get bonier and elbows flabbier as the years go on...

The Braun/Brawn error is understandable. Before Heidi reminded me, I used to make the same mistake. I have the feeling that the company's representatives in this country are not encouraged to use the German pronunciation. A similar problem apparently exists with Knorr, pronounced with the K in German but in England, where we say words like "knight" or "knowledge" and its derivative with the "k" silent, it is also pronounced with a silent "k".

Somebody has just written a biography of Eva. As far as I know no one has yet attempted one of Hitler's Alsation.

I love being able to correct English learners firmly that the k before an n is always silent; few other matters can ever be enforced with such certainty. Though Chaucer would have said it, as in 'Ho! quod the knichte...'

Hitler's Alsatian bitch was called Blondi. The poor creature was used as a guinea pig to test the prussic acid ampoules provided for his staff. He was according to his biographer Ian Kershaw probably fonder of Blondi than of Eva. According to Kershaw, Hitler's dog attendant, sergeant Fritz Turnow, administered the dose and the dog slumped over instantly. One of many horrors attendant upon the end of the Third Reich.