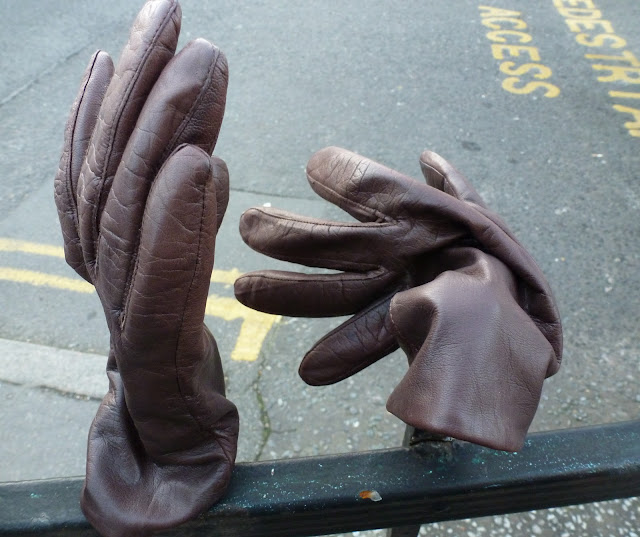 In this weather people wear gloves and then drop them which goes to explain the frequency of sights like this. As recent photographs have shown, single glovesturn up on the spikes of railings, but here someone must have dropped a pair which a thoughtful passer-by has spiked. These appear to be  trying to communicate with one another. At least they have company.

Standing in The Grove  (yesterday) I try to locate the source of loud birdsong which is surprsing because of the frost it being so early in the year. "What is it?" says a man who approaches me at the moment when I spot the bird. "I think it's a thrush," I say. "In the laurel?" "Yes. There it is." "Yes it is," he says. We agree  that it is surprisingly early for a thrush to be singing. "I live in Hastings," he says. "I saw a parakeet the other day." He walks on "Happy bird-watching," he says.

As I walk past The Grove Tavern this morning, the smell  of burning logs  floats in the frosty air. One of those smells which one could get nostalgic about. A cliche smell like  the smell of fresh linen.
Posted by Unknown at 5:04 pm

They look like a rather good pair of gloves, I hope they find their way back to the right hands!

We once saw an old leather glove in the middle of the road, and Tom became convinced it was a tortoise and drove back to rescue it. Now when there's a glove lying about I often refer to it as a tortoise, just to tease.