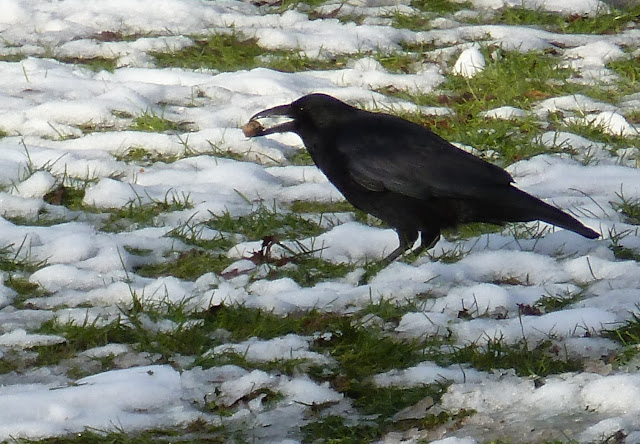 The current batch of photos mostly involves the snow which came and settled but did not stay as long as it has in recent years. Here is Mr Crow with an acorn which was probably buried by Miss Squirrel and forgotten.

A filling has fallen out. I have know Tim my dentist for nearly 30 years and he knows that the less I know about about what he is doing  the happier I am. So I lie back content to let him fill the vacancy without commentary. The drill buzzes and hums. "You're very brave Joe," he says. It is only then that it occurs to me that he has not applied the customary local anaesthetic. I have only the slightest twinge of discomfort. But brave? Me?  Flattery is better than  anaesthetic.

From the top of the park called Calverley Ground there is a good view of the southern part of Tunbridge Wells, The Common gathered round it to the west and the heights of Ashdown Forest in the distance.  The clusters of building are dominated today by a single flag flying from the ramparts of Hoopers the department store. It is a red flag on which is inscribed in white letters  the word Sale.
Though cowards flinch and traitors sneer
We'll keep the red flag flying here.

Sitting in the pharmacy, waiting for my gout prescription, I gained mild (very mild) diversion from a display of bubble-pack items whose functions weren't at all clear. Some turned out to be pill dispensers; another - resembling the obstetrical tongs one might use during the confinement of a hamster - was beyond both me and my ultimate reference (VR). A tongue scraper! When did you or I last need one of those?

And yet another, looking like a cheapjack hypodermic syringe, apparently provided the DIY wherewithal for applying or inserting a temporary tooth filling. I assume that whatever the pain levels, that would be a step too far for you.