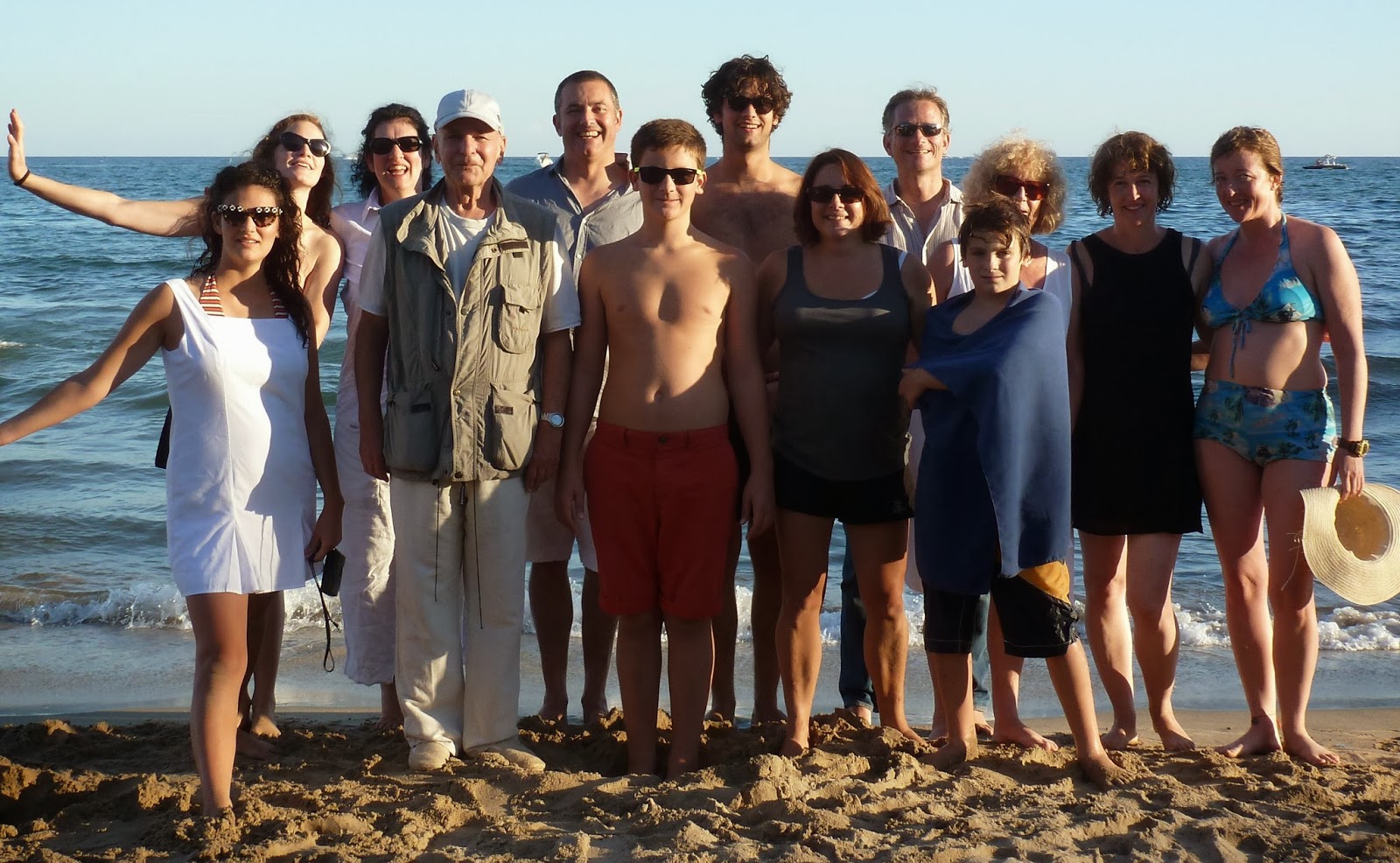 Three days into our holiday comes my birthday. And with it a surprise. Over recent years it has been celebrated quietly by Heidi and me in Sitges far from the madding crowd. This year because of the number of birthdays counted by some since my arrival on earth, the crowd come to us. As far as I am concerned  it is out of the blue. We meet as it were by chance at the restaurant where Heidi and I usually have lunch.  My children,  Toby and Pippa, Heidi's children Jenny and Caroline, Toby's two children, Jacob and Jet, and Pippa's Josh and Rowan, Toby's partner Kim and Pippa's husband, Dom, Jacob's girlfriend, Lydia, Heidi and I all line up after lunch beside the sea where a passing stranger takes our cameras and captures the memory for several of us. Only Pippa's daughter, Giselle at present in Australia, can't make it.
How do you thank members of your family for such a gesture? I rise to my feet and casting my eye round the lunch table provide a vignette memory of encounters with  each of those present. My notes are their faces which fortunately I can still identify. A speech, I think to myself, where  my notes are their faces.

Every year a busker performs in front of the restaurants opposite the sea. He is an Italian clarinetist (not a very good one, I think) who has hit on the idea of trundling around an amplifier on which he plays recorded versions of classical music, for example Mozart's clarinet concerto - and at moments which he considers appropriate, makes his own live contribution. This year for a couple of days the amplifier breaks down. What an improvement! The reedy voice of his instrument, unaccompanied, weaves in and out of the sound of the  sound of the breakers, bringing a sad, plaintive and above all genuine note to his performance. For once he has my enthusiastic support.

Litter is seldom seen on the beach. Every morning council workers clean and rake the sand. But most important, beach users belong to a responsible and considerate culture. One man lying on the beach near the spot from which we swim has a cone-shaped ashtray with a lid. The sharp end of the device goes into the sand.  When he has finished a cigarette, he stubs it out in the sand and drops the end into the open end of the cone, covering it with the hinged lid.
Posted by Unknown at 4:55 pm

Happy Birthday, Joe! Sounds like a fantastic celebration and what a lovely family photo in a lovely place. Where is Heidi hiding - is that her in the back row, third from the right?

How absolutely splendid, congratulations, to you and all concerned!

Like me, you have passed beyond the need and desire for material birthday gifts; what counts are gestures. This was the most splendid of gestures, resulting in a unique gathering. My congratulations to all who contrived the event.

Round about the same time my birthday occurred and it too involved a unique gathering. In the past a large percentage of my close family with their dearest and dearest has foregathered in Hereford and we have gone out for a meal. However the event usually clashed with the Reading Festival and that meant grandson Ian (Professional Bleeder's son) was absent. Also, Peter (PB's partner) sometimes found it difficult to attend because he worked nights. Both were present this year and the event was expanded, beginning with a catered meal here at our house and followed on Saturday by dinner at The Hardwick, near Abergavenny, (see the GFG) the party now large enough to require a mini-bus.

In fact there was a coda. During this maelstrom it was learned that Peter had lost his job. While he was here I slightly edited his CV and printed it out for him. Within a week or two we learned he had got a better job (fewer nights) and this was the best present I could have hoped to receive.

Thanks all. M-L Heidi is half concealed by third from right. Unfortunatly circumstances prevented a better arrangement of personnel.

"My notes are their faces..." yes, great line/ what a delightful birthday celebration!