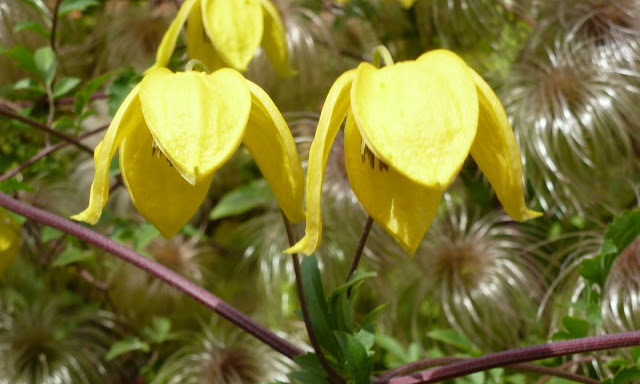 Clematis orientalis. Another subject that occurs annually in Autumn when the flowers appear along side the seed heads climbing over a fence in Berkeley Road.

Trofie is one of the many shapes in which pasta is made. It is only recently as far as I know that it has been available in shops in this country. It consists of thin, twisted threads of pasta like
pieces of cord an inch or so in length. Cooked the pieces look a bit like worms.  Sauces like pesto are recommended to accompany it. I have found another use for it. You leave the pasta to get cold and fry them until they become crisp and golden. Much better than potato crisps and, as I found the other day when I served them with pheasant, an interesting substitute for game chips.

As I wander about with my camera at the ready, I speculate about  unexpected photo opportunities. Squirrels there are in plenty, blackbirds and  cats and pigeons and crows, but who knows? One day a spaceship may appear over a roof top. Or an angel  might land beside me with a whoosh of wings and a cantata.