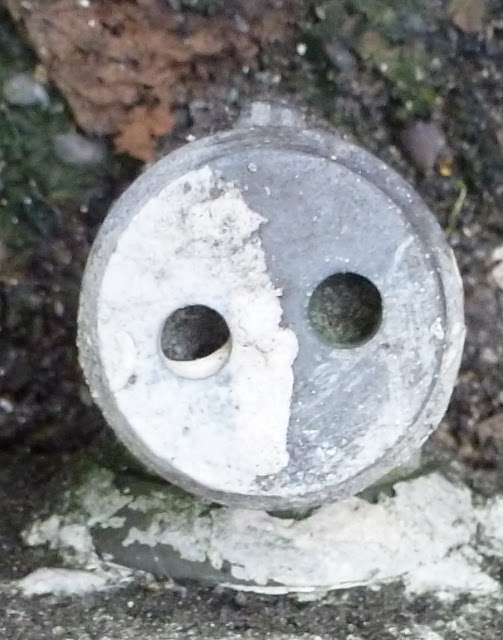 Only a couple of inches in diameter this cross section of what I take to be a cable emerges from the base of a wall. The photo refers to yesterday's post,  where  I reflected that the infant's early recollection of human features seems to have become part of a general aesthetic. It occurred to me that emoticons neatly fit the theory.

In response Roderick Robinson commented on emoticons  which he sometimes finds difficult to read. So do I. For the most part I regard them with suspicion. Depending on how they are treated they run the risk of becoming ready-made statements and supplanting the need to find the words for which they stand. I have a similar suspicion of captioned greetings cards which replace the need for original words and sentiments.

On the other hand emoticons have their uses and their virtues. "Why shouldn't we speak  in praise of emoticons?" writes Sam Leith in the November issue of Prospect magazine.  "... for a start they introduce a pictorial element into the written language: something western languages have not had since the days  of illuminated manuscripts..."  From his article I learn that it is 30 years since Scott Fahlman, professor  in the computer science department of Carnegie Mellon University in the US,  when he proposed that humerous posts on his departmental message board be marked with a sideways smiley face to make it clear that they were intended as jokes.

The grotesque Millennium clock opposite Victoria Place in the centre of Tunbridge Wells is not working. You might say that the only purpose it serves is to tell the time. As a monument it can only  be described as a disaster.  You never hear a good word said about it; it deserves only opprobrium. As I pass it to day I think to myself  how wonderful if someone came quietly in the middle of the night, took it apart and buried the pieces. (:-  just in case anyone takes the suggestion seriously.

A gusty day. Dead leaves whirl in circles in a sort of dance without rhythm. Above the roof tops a solitary seagull glides, tilting its wings this way and that  above the town.

I tend to avoid the over-use of emoticons, only really using the smile one and only with people I know use them themselves, I know many find them irritating, ingratiating or confusing.

However, as we know, there is often uncertainty in writing about the tone in which something might be meant, whether it's being said with humour, irony, kindness etc. The smile, which would in face-to-face discourse be actual, can soften an apparently waspish, obtuse or humourless response. With our friend RR, I have been known to append in brackets the words 'append smile emoticon', lest I am misinterpreted.

Also, different people have their own quirks with them; Clive HJ always does his smile the wrong way around, ie left bracket, dash, colon, which initially one reads as a frown; Chloe does a very simple colon, bracket, without a nose; I like to use a wiggly dash to convey a wrinkling of the nose, which is probably horribly affected and twee...

I'll keep this space emoticon-free, however.