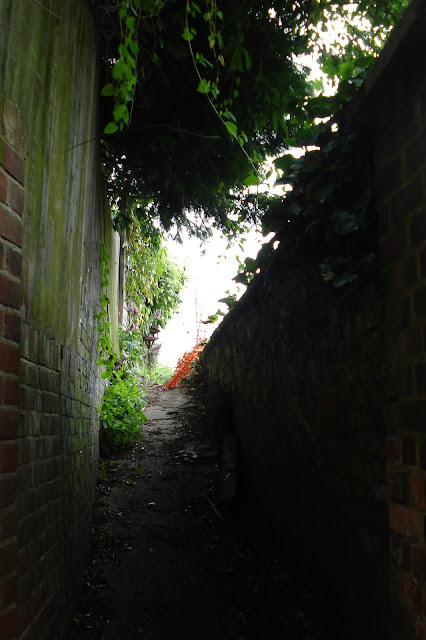 What is called a twitten in these parts - a narrow path giving access to back gardens behind rows of houses.


I step aside to allow an old lady dressed in pink to pass on the narrow pavement. "One way traffic," she says.

Robbie's response to my reference to  the  New Scientist cover line which I found hard to resist deserves a response. The line which attracted me was Quantum Shadows. No waves. No particles. Reality is even stranger than we thought. I have since had time to read  the article which I find less challenging than I had imagined. It sets out to confirm rival theories over the years about the nature of light. Some say it consists of waves. Some of particles. At different times both theories have seemed to be true.  What the article suggests is that light consists of both waves and particles and that we are not (or not yet ) in a  position to determine its true nature. Elegantly the article draws a parallel between Plato's philosophers, able to see only  the shadows of the real world on the walls of the cave in which they are confined, and physicists to day who can detect only "shadows" of the waves and particles which constitute the quantum nature of light. I may have go it wrong but that seems to me to be the essence of the article which, as it happens, following Robbie's challenge, I am not referring to as I write this. Credit to the article's clarity, not to me, an ignorant but aspiring layman, who usually flounders in such matters.

Very well done indeed. I'm not seeking to diminish your achievement but had it been me the cross-reference to Plato would have been a mighty strong hook on which much of the rest would have hung. The only problem might have been wanting to get to Plato too quickly and thus losing some of the intervening techno-facts.

I had a reason for putting this challenge. Under similar circumstances I have a bad habit of mis-remembering a central - and very obvious - detail. Calling Plato Ptolemy would be typical here. An unforgivable and inexplicable cock-up.

You came through with flying colours. Unless, of course, it happened to be Ptolemy in the first place.

This was an easy one. Usually I would have had to refer back to the article at the time of writing. Luck I suppose.