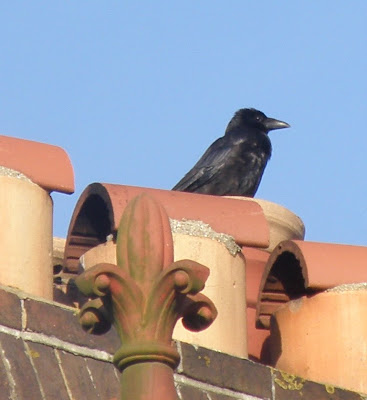 Another sighting of one of the junior crows which have been around this summer, this time, with chimney pots and finial.
.
The bean plant, which has been climbing along the railings between the pavement and a neighbouring front garden has begun to fruit and small green beans hang from the black wrought iron partition, proof of the persistence of a casually planted seed. Will passers-by be tempted to pick the beans, I find myself wondering.
.
A moment of understanding this afternoon, as the Tunbridge Wells "Music Festival" gets under way in the Pantiles and on the steps of the Forum building on the edge of the Common.
The music, as they say, is "live". Even now, where we live a quarter of mile away, it drifts up the hill - an insistent, rhythmic wailing.
Meanwhile, down there, people pack the tables outside bars and sit on walls, their pint glasses beside them. Dogs lick the remains of iced lollies that have fallen on the pavement, and there is a fever in the air, almost a hint of revolution not typical of the town or its reputation. The rock and roll is delivered, as ever on these occasions , by enormous amplifiers, which drown normal vocal exchanges and inhibit the simplest of thoughts. Close too, the ground shakes, a long lasting-earth tremor, a seismic roar. But people walk up and down apparently happy, though no one, I notice, is smiling. Perhaps the tenor of the music is too serious for smiles.
What is it that I understand as I join the crowd? I understand why it is necessary for people nowadays to speak at the top of their voices, even on their way home in the early hours of the morning. I understand that they have become accustomed to yelling at one another; that what they say makes no sense at all; that there is mutual incomprehension among them, which requires articulation to be at maximum volume; that the music and the shouting have made them permanently deaf; and that they are afraid, in any pool of silence that they may come across by chance, that a monster may be lurking within it that will consume them in one silent gulp.
Posted by Unknown at 12:38 pm

It's really true about not being able to hear yourself think isn't it? But as you point out, many people don't want to...

"Nobody is smiling" - a curious byproduct of these seemingly informal but ultimately highly ritualised affairs. As Lucy suggests thought may be at a premium. And afterwards, also. I have sought definitions from the participants wondering whether they could help me penetrate what is clearly an exclusive experience. "What is garage rock?" I asked of an otherwise articulate and infinitely better-educated woman of my acquaintance. The response was vague and gave me nothing to bite on. The only instances where articulacy emerges is during the frequently expressed condemnations.

Handsome bird, this one.

Your photo has movement, what with the diagonals, and depth, with the finial, the tiles layer and finally young crow. Not bad for a two dimensional image; not bad at all!