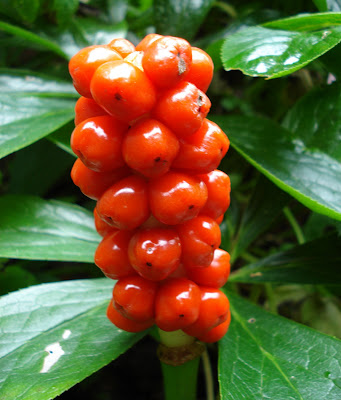 Arum maculatum otherwise known as Cuckoo pint, Cuckoo flower, Jack in the pulpit, Parson in the pulpit, Devils and Angels, Red-hot poker, Snake's meat, Cows and bulls and, an apparently recent addition to the list, Willy lily. According to Richard Mabey in Flora Britanica, the pollen of the flowers throws off a faint light at dusk, so that when Irish labourers came to find work in the Fens during the famines in their own country in the the 19th Century, they named the lilies Fairy lamps.
.
"Come and look at this," says Heidi. A new form of container for her favourite toothpaste consists of a dispenser in the form of an upright cylinder, which exudes its paste (or gel as it likes to be called) when pressure is applied to a button on the lid. The dispenser has gone mad and erupts like a volcano, spewing out its evil looking blue goo, in an unstoppable stream. It is fun while it lasts. My preference is for old fashioned white toothpaste.
.
Probably because without complex machinery we can't manage it, everything that flies of its own accord and under its own steam, is fascinating. That goes for thistledown. In the Grove today I watch a single seed proceed, carried by the wind, parallel to the ground, at about my height, in a straight line as though it knows exactly where it is going. I wish I had the same sense of purpose, apparent or actual.
Posted by Unknown at 4:17 pm

Sense of purpose yes - but I wouldn't choose a straight line. Byways are just too much fun.
June in Oz

You may presently prefer conventionally tubed toothpaste but wasn't there a decade or so when you mourned the passing of those tins of powder (the lid almost impossible to remove) called Eucryl, and before that the healthy dose of soot applied with a frayed twig. Not that I'm in favour of Vesuvian toothpaste (Where was your camera?) but I have just removed from my desk an inkjet colour printer, a scanner and a b/w laser printer and replaced them with an all-in-one device which even includes fax should I find someone who communicates this way. I am revelling in a cure for my claustrophobia and deliberately looking for pens, notes and rulers to fill up the resultant space which nature is said to abhor. I'm being unfair of course. There is nothing as sad as an outdated computer or its peripherals.

June: I can't refrain from quoting Flying Crooked by Robert Graves, a favourite poem, also, of a dear friend:
"The butterfly, a cabbage white,
(His honest idiocy of flight)
Will never, now it is too late,
Master the art of flying straight,
Yet has - who knows so well as I? -
A just sense of how not to fly:
He lurches here and here by guess
And God and hope and hopelessness.
Even the acrobatic swift.
Has not his flying crooked gift."

BB: I remember those tins, but never used them. It was tubes all the way back to infancy, but the sort, (Were they made of some sort of thin and flexible metal?) that you had to roll up at the bottom as the paste was used. We were exhorted to squeeze from the bottom to make the operation easier for other users. The next big step forward was a change to a plastic material for the tube, and stopper wide enough to allow it to support the whole tube with the result that gravity ensured that the paste collected near the point of expulsion.

Lucy: Lords and ladies was my starting point. That was what I always knew it as. I'm afraid I deleted it by mistake. Thanks.