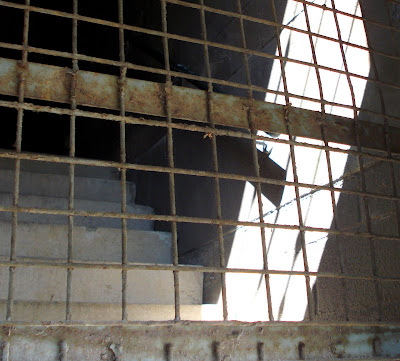 The way to the top.
.
The documentary film, Man on a Wire is on television last night. How Philippe Petit helped by colleagues walked on a tightrope between the towers of Notre Dame, the towers at one end of Sydney Suspension Bridge, and ultimately between the twin towers of the World Trade Centre in New York is an epic of modern times. The planning alone and the successful accomplishment of all three feats compares in some respects with great military victories and in others, with the preparation and presentation of works of art.They appeal to all who aspire to what seems to be impossible; while walking on a wire, as my 80 year old neighbour says this morning, is what one has been doing all one's life.
.
A visit from two grandchildren, who arrive under their own steam rather than with their parents is a pleasure at several levels. Because I only see them at irregular intervals their transformation into young grown ups is striking. Not so long ago you sprawled with them on the floor and played with toys or equipped them with paper and crayons. Now they are happy to sit at table with you making conversation and drinking wine. I find myself staring at their faces with what might, if they were not related, be considered bad manners. Features and mannerisms are reflected there, which I have seen in earlier generations, my own, my parents and grandparents, and the wider, slightly different focus of their parents and grand parents. A snapshot of evolution or something close to it.
Posted by Unknown at 4:10 pm

How wonderful to learn a little about your grandchildren. I love those amazing feelings of revisiting one's ancestors in our descendants!

Good to have a Grandpa that sits and talks over a glass of wine.

It's good to have that licence to stare at people isn't it? Sounds like a good visit.

(I'd have liked a grandfather who sent me 'Anna Karenina' in my teens too. Mine apparently loved cycling and seafood and Scotland and salmon, and I think we might have got on well, but alas I was born too late.)

My granddaughter is doing politics at Leicester. I asked her to email me one of her essays - about theories of democracy with lots of quotes from Schumpeter. It is envigorating to discover that an offspring's offspring has entered a demanding world that is entirely alien - and mildly discouraging - to me.

Had seen Man on a Wire at a film festival. Recommended it to my daughter and force-fed it to sister/brother-in-laws presently staying with us. Both were entranced. Glad to see you identified the vital heart of the story - le force de la logistique.