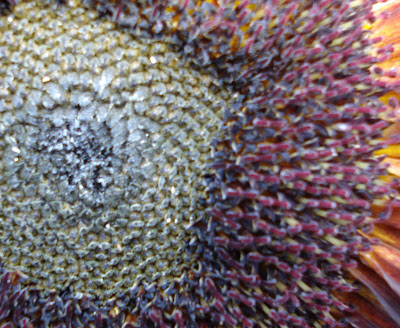 Crater in a sunflower.
.
An email from Amazon France urges: "Préparez la rentrée sans vous ruiner". I guess that refers to the annual expenditure that parents expect for their children's return to school, conflated here with the annual return to Paris from the country, an annual population surge of which there seems to be no equivalent here. Having no children of school age, and not sharing the privilege of a house in the French countryside or a dwelling in Paris to return to, the message in no way applies to me. But it still gives me pleasure to have been addressed in French, in terms intimate enough to suggest that I slot into one or all of those categories.
.
The climbing beans of three varieties are behaving like jungle plants this summer towering above me in ever increasing tangles. They taunt me with their long, juicy pods in burgeoning clusters, which barely give me time to pick them before more appear. Today, I notice that towards the top of the pitched structure of bamboo poles, which I built for them in the Spring and which is now completely hidden, the beans, being short of room, sometimes curl round one another to form strange rings and half moon shapes, which no supermarket would accept for their regimented displays. The nasturtiums have as usual seeded themselves from last year and now bestrew a whole bed with their orange and yellow blooms. and saucer like leaves. As I select a few flowers for cutting I note that some stems have behaved in a similar way to the beans, eager you might say, to express themselves. In one case a stem has wound itself round another rather like those puzzles of twisted steel shapes, which as a child, one was expected to unlock.
Posted by Unknown at 1:41 pm

Rothko colors in Sunflower 2; especially if I view the photo without my reading glasses, which blurs the details a bit, allowing me to see blocks of color.

I see Tesco is copying the French supermarkets by offering stuff for la rentrée at the beginning rather than at the end of the summer holidays. As one whose passage through the educational system was as disjointed as that of Odysseus on his way home I can only say: "The poor buggers".

TC Thanks for pointing out the Rothko colours, which I hadn't considered.

BB Or "les pauvres bougres", which expresses a similar sentiment without the underlying sinister meaning of the English word. Both seem to come from the same source, ie Bulgurus or member of the Bulgarian orthodox church and therefore a heretic. I like the French "un bon bougre", a good lad.

Or alternatively, Bulgarian heretics were considered capable of any crime including that one... There were similar puns on Cathars as doing similar things with cats. I don't think I've ever heard 'bougre', but perhaps I haven't been listening sharply enough!

I used to hate 'Back to School' at the beginning of the holidays, as did my mother, perhaps because she considered it a reproach that she was not one of those terribly organised parents who got all the stuff ready before heading off on holiday...