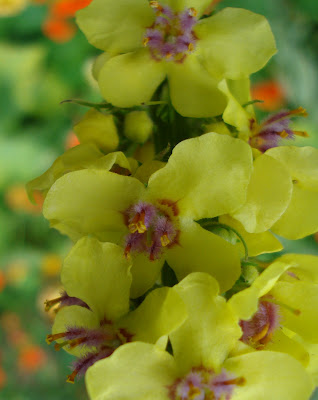 The majestic spikes of a verbascum have appeared again (self-seeded) in the vegetable garden. It is a flower garden escape, but my well composted beds have provided generous hospitality now amply rewarded. In close up, the florettes are everyhting that summer flowers should be. In the wild, the plant is known as mullein. There are around 360 species in Europe, the Middle East and North Africa. For those who care, it is a member of the Scrophulariaceae family. As I write this, I realize that I made the same remarks last year. Another anniversary. The dance of the seasons.
.
From the side of a house in Mount Sion some builders have removed the weathered hung tiles and stacked them on the scaffolding. They have arranged them neatly in rows and stacks so that from a distance they look like old leather bound books.
.
Among some workman's tools by the roadside are a kettle, two caddies for tea and sugar, and a teapot with a cracked spout.
Posted by Unknown at 11:41 am

As a wild child in the mountains of Arkansas, I used to hike the woods for hours at a time. Mullein leaves made good forest TP.

We also used the leaves to staunch blood flow on scraped knees and elbows. Used to drink tisanes of mullein for bronchitis. Used dried stalks to light fires in the wood-burning cookstove.

Office workers who probably visit the vending machine five times a day often sneer at the fact that people who do real work have tea-breaks. The opportunities for wasting time in an office are an order of magnitude in excess of those when faced with digging holes in roads, etc.

Mullein is a pretty word too. I like to think of such remedies. And of those smart moths, which I didn't know about. Pax verbascum.

I like the business like approach to refreshments. Down with vending machines. Long live the tea lady!

No, the moths aren't smart, but very drab; their caterpillars are smart!

... and 'pax verbascum' pleases me greatly. Dreadful puns in Latin have a special cachet.