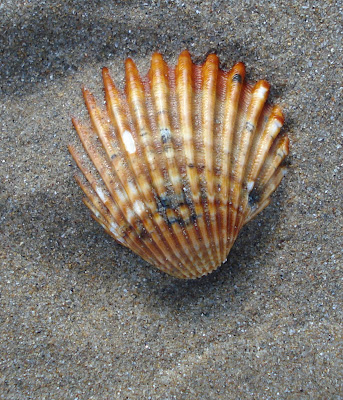 Nothing spectacular about the jetsam at the edge of the sea at the moment, but one shell where the tide leaves it, suffices as a statement and a memory.
.
Alberto Bigaire, the proprietor of the Costa Dorada restaurant, where we often eat, sits at a table by the door, where he has a good view of the tables outside the restaurant. He says, unlike some of the other bar owners and restaurateurs affected, that the the new traffic-free sea-front has meant more business. I point out that he seems to be alone in believing this. Others have said that especially at lunch time, business has been down. "I have better food and better waiters, " he says. I believe him, and when, on our last day, he asks me to telephone a carnation nursery in England to confirm an order - he is a keen gardener, and arranges flowers from his garden on the lunch tables every day - I interpret with some satisfaction, though not a lot of skill. I like being involved even in small way with a restaurant in a town which we have become fond of over the years.
.
On the plane going home, I strike up a conversation with a man with an Australian accent who is sitting next to me. He and his wife are on their way, as part of a five week visit to Europe, to spend some time in the South east of England. "Where I ask will you make for first?" "A little place called Tunbridge Wells, "he says. "You don't live there?" he adds, when I laugh with pleasure at the quality of his choice.
Posted by Unknown at 3:09 pm

How delightful to make friends with the restaurant owner, another gardener.

Ah, Tunbridge Wells is in the eyes of other travelers too! Next time, and I hope there is one, we plan to tour the town a bit more. So much more to see in England. Our daughter and granddaughters are flying back to London in a week after spending two months here - it will suddenly be very quiet.

But are you sure you shouldn't perhaps be moving to Sitges?

Distances seem to shrink in the Antipodes. On one of our NZ tours we were staying in a B&B in Alexandra, more or less in the centre of South Island. "Where's your next stop?" asked our host. We said Te Anau further south. "Oh that will be the Pines; I sold John Pine a pair of trousers." When we were ensconced with the Pines they too asked where we were going. The answer was Wanaka. "Staying with the Smiths? The family has thousands of acres of farmland. Their spread would make ours look like a a market garden." And so on. A bit different from Kingston-upon-Thames. As we drove away for the last time, after a twenty-year stay, I reflected we knew the names of the neighbours on either side of us in Tudor Drive and nobody else. I imagined someone saying: "Did you know the Bondens have moved?" and being answered "Who were the Bondens?"

M-L Next time, we won't assume that a train to London is a better better bet than investigating more of TW.

L. We have often thought of it, as one does on holiday. But it is good to be home with books and things.

BB Distances seem to be shrinking everywhere. Perhaps it is the web but I am less surprised now by coincidence of time and place than I used ot be.

The coincidences of location seem to happen all the time in Perth (W. Australia) when we visit our expatriate daughter.
I sometimes got the impression that most of Kent must have emigrated at some time.