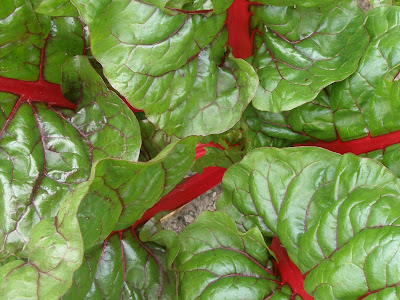 The chard known as ruby chard. The stems, which take longer to cook than the leaves, which resemble spinach, are best cooked separately. After blanching the leaves, I sometimes add them to a frying pan where onions are beginning to caramelise and cook the two together for a while.
.
It never occurred to me to twitter, until I read Dave Bonta's post in via negativa, on micro-poetry. He points out that haiku and the 31 syllable tanka both fit snugly into the 140 character Twitter format. It occurs to that the apophthegm - brief, pointed and practical - is another attractive possibility to engage twitterers. I suspect that Twitter is not intended for such rarified activity, but the format should be seen as a challenge rather than as a receptacle for idle doodling. I recommend Dave's post and the examples he gives of the sort of material suitable for twittering. For instance: "For me neither the honey nor the bee", which somehow resonates with opportunities to vary the usual, to twitter for example.
.
Sitting under sunshades outside Sankey's at lunchtime, the rain suddenly tumbles down with tropical intensity. We manage to remain dry, just; though the rain is rushing through holes in the umbrella. I watch Heidi nursing her Sauvignon Blanc and remember G K Chesterton:
"And Noah said to his wife as he sat down to dine,
I don't mind where the water goes, if it doesn't get into the wine.
Posted by Unknown at 11:47 am

I've been catching up here since several days away. Twitter sounds great for you! I received your Twitter invitation, thank you. At the moment I don't have the time for it with the blog is still keeping me enslaved and I'm about to return to the printmaking studio again after half a year's absence.

Is Twitter stressed? I asked.
No, stress comes from within.
Thanks be to Gates for word count,
Since Twitter’s for the birds

With the corset of iambic pentameter removed I am misshapen and my belly jiggles. Milton croaks disapprovingly

That was a really good post of Dave's wasn't it? Your intimations of Twittering made much more sense in the light of it...

I agree that Twitter is a micro medium full of possibilities. A quick tweet from a mobile phone while travelling across a city in a train, or on reaching the top of a staircase could be good. Epigrams and paradoxical sayings may also occur.