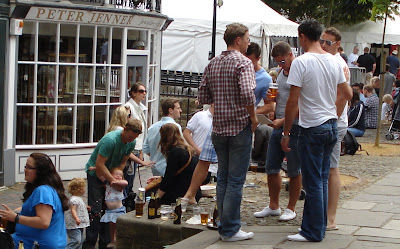 The Tunbridge Wells music festival in the Pantiles.
.
The idea of twittering strikes me as better than the act of twittering. Twitters limited to 140 syllables do not have to be broadcast on Twitter. This blog will do as well. To start with: "There's no going back now, says the bullet".
.
Machines which go bleep are so numerous that when we are disturbed by one in the middle of the night bleeping at 3 minute intervals, we spend ages searching from room to room for the source. It transpires that it is a carbon monoxide alarm that has gone off. There is no gas appliance which could explain its behaviour. The alarm's presence is explained by the old central heating boiler, now replaced, which apparently might have leaked an odour-less gas and killed us. The new boiler renders the alarm unnecessary, but we see no reason to dispense with it, until, that is, it wakes us up. The instructions on the alarm are alarming. If the bleep is continuous, it says, open all the windows and evacuate the house. Fortunately the bleep is sporadic and we are advised to switch off all electric devices, and open all doors and windows, advice which we ignore. In the morning a gas man arrives, who says that the alarm has gone off because the battery is running out, despite a note on the machine which indicates that it can be used until 2010. I hurl it with some satisfaction into the wastepaper basket.
Posted by Unknown at 2:24 pm

I posted a couple of months ago about the smoke alarm at our French villa which went off despite no smoke. My son-in-law suggested that it could well be failing batteries, a diagnosis which seemed counter-intuitive; battery-powered bleeping to signal imminent battery failure would seem to hasten the onset of silence. However, we bought a new battery, installed it and lo - he was right.

I understand your rejection of this device (or is it just the battery?) but does this mean you are now without smoke detection? This is a requirement in all new houses and may well be written into your house insurance policy. Sorry to be such a Jeremiah.

As to Twitter, I spent some time trying to discover the rules and discovered that it's "up to 140 characters" (not syllables which could cover a sonnet). This seemed so vague. Does one attempt to get close to 140 characters (which had me ending up with a rickety four-liner) or something much shorter, like your bullet quote, which seems to reduce the 140-char limit to irrelevance? Or simply write a haiku? As millions of people zip Twitters all over the globe I find myself on the outside looking in, unhappily bereft of la règle du jeu. Yet again, as with versifying, I need rules.

I remember your smoke alarm account. This wasn't a smoke alarm but one dedicated to the detection of carbon monoxide, which is poisonous and odourless and therefore doubly dangerous.It is a by product of gas appliancances when they are in use. We had a very old boiler and were persuaded by British gas to buy the alarm, £5or so only, as a safety measure. The new boiler makes it redundant.

That was a slip of my mind. I know that it's characters and not syllables, having signed up for twitter. I don't want to twitter. But I quite like the idea of firing off brief synoptic, perhaps paradoxical, observations as part of a blog or on postcards, even. It's a maximum of 140 characters (in my mind that means up to 140 characters)which is a tidy restraint.

I don't think I could Twitter, as I lack the discipline of restraint - too loquacious for 140 characters.

Say, if one becomes besotted with the medium of Twitter, could one be described as being "Twitter-pated?"