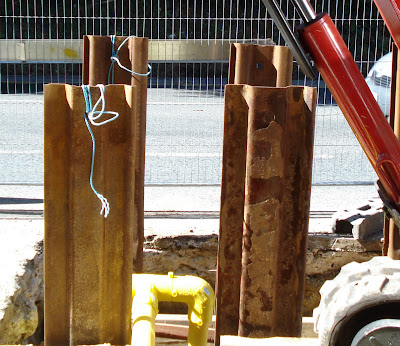 Operation.
.
It is the 10th Anniversary of the Tunbridge Wells Farmers' Market. Someone has baked and decorated an elaborate cake. The Mayor arrives looking jolly. The cake is breached in his honour and he is pursued with a tray of slices, one of which he dutifully accepts. Meanwhile a small crowd of people eyeing the cake gathers about the stall where it is displayed. It is like birds fluttering round a bird table. After a while the tray of slices is offered to those who seem most eager, and the slices disappear, while those who have been disappointed look hungrily at the large section of the cake, which still remains intact. Perhaps it is being saved for the stallholders when the market closes. The cake watchers wander off probably looking for free samples of cheese and fruit.
.
A kitchen shop has closed recently and much of the detritus remaining, after the sale and removal, ends up in a skip. I approach with my camera and begin to take shots of unlikely juxtapositions. I look up to see, at the other of the skip, a dour young woman adding cardboard to the jumble within. She looks at me disapprovingly and I look at her. No word is exchanged, but I refrain from photographing her, which, though it might have led to difficulties, I now regret.
Posted by Unknown at 5:06 pm

I so enjoy your snippets,
alive with tastes, smells
and visuals.

Thank you. Appreciation is always appreciated.