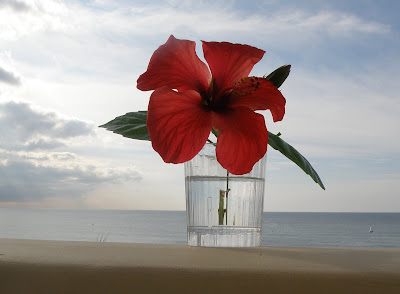 Holiday memories will continue for some time. ...And Heidi stole an hibiscus for my birthday - from the swimming pool, and presented it in a tooth mug.
.
The proprietor of the convenience store says he is short of staff: "Holidays and illness, silly things like that" he says. " Youngsters don't work like we used to. They've got too much going for them. The want a pair of shoes; see a pair in the shop for £100 and then buy it. It comes too easy." I had thought of him as an amiable young man. But, perhaps, encouraged, a little mischievously by me, he is making grumpy, old man's conversation. It catches up with all of us I suppose.
.
Trying catch up with magazines and the like, I note an article by Boris Johnson, the Mayor of London. He is describing a visit to New York to promote London. He says that while in New York, he is asked for his views on our National Health Service. "My strong instinct, " he writes, "is to swerve. As the man says in Dodgeball - the world's greatest ever film - dodge, dip, duck, dive and dodge." That's what politician's do isn't? How neatly expressed! I haven't seen Dodgeball, but I think I'll ask for it at the video shop, even if it doesn't turn out to be the world's greatest film

Your photo puts me in mind of a Dali painting, surreal against the Spanish sky; or perhaps a Georgia O'Keefe, the intimacy with the flower. Nice work, Joe.

The stolen Hibiscus photo suggests Rene
Magritte to me.

You are a pair of romantic roustabouts with your stolen flowers...

That photo really is a stunner; I like the way both flower and sea and sky are all quite sharp, wide depth of field, which is rather the opposite of what usually happens, so is all the more striking.

I just want to say that Dodgeball is a wonderful, funny, earthy, heartwarming film. I hope you like it!

And I love the stolen flowers, you naughty pair.